One homeless person dies every 19 hours in the UK 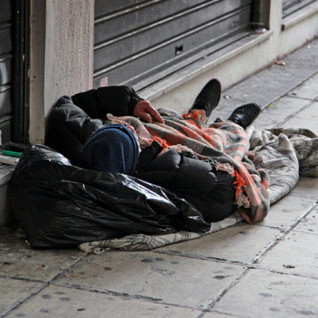 An investigation by a campaign group has found that one homeless person dies every 19 hours on average.

Research by the Museum of Homelessness (MoH) suggested that 235 people “affected by homelessness” had died in the last six months.

The social justice group has been documenting people’s deaths since April 2019 and honours people’s stories as part of its Dying Homeless Project.

Working with the Bureau of Investigative Journalism, MoH used Freedom of Information requests, local authorities’ figures, coroners’ records and testimonies from families as well as details from media coverage to gather the date – but believe the true figure could be “significantly higher”.

Of the data that it holds that documents people’s situation when they died, more than 30% of fatalities since 2017 have occurred where people were in emergency or temporary accommodation. These figures – and their accompanying stories – provide a stark illustration of how the services provided to the UK’s most vulnerable people regularly fail to meet an acceptable standard, the group said.

It has called for official bodies to better record homeless deaths, claiming the data so far registered by councils and health bodies is inconsistent.

MoH said: “The Dying Homeless Project uses information from coroners’ enquiries, media coverage, family testimony and freedom of information requests to verify details of each case.  The number of people that died over the last six months is likely to be significantly higher than suggested by the figures reported today given the slow pace at which necessary data is revealed by local authorities and front-line service providers.”

MoH co-founder Matt Turtle added: “People affected by homelessness continue to die at a shocking rate despite the passage of the homelessness reduction act nearly 18 months ago. We regularly hear from people who feel they’re safer on the streets than in hostels and this data shows why. People are placed in inadequate, unsafe accommodation, whether badly run hostels or other forms of private rented accommodation, with all too often fatal consequences.”