Amy King, digital officer for Ypeople’s sister organisation YWCA Scotland - The Young Women’s Movement, looked after the digital channels at Ypeople for the month of March. Here she shares some thoughts on how homelessness is a feminist issue. 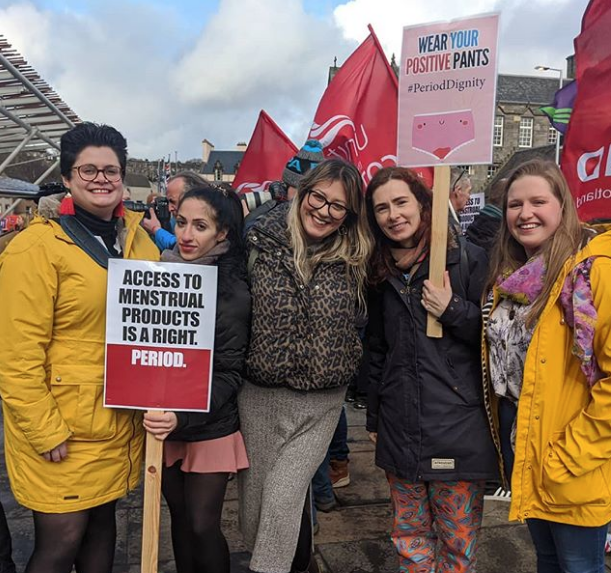 Amy with some of the Young Women Scotland team

I’ve come to the end of my month working for Ypeople and I have learned so much from my colleagues here in these last weeks. It has been a privilege to see first-hand the difference Ypeople are supporting people and how lives are being changed for the better as we change how homelessness and housing difficulties are tackled in Scotland.

Before I sign off, though, I’d like to take the time to share, from the perspective of YWCA Scotland – The Young Women’s Movement, why homelessness is also a feminist issue.

According to research conducted by Shelter Scotland, of all household types to submit homeless applications in 2016-17, 21% are single women, 17% are female lone-parents and 7% are couples (although the gender makeup of those couples is unclear). We can surmise, though, that homelessess absolutely affects women. They are, however, often invisible.

Engender published a report in 2020  which highlighted that, while international human rights frameworks are in place, women’s representation within housing and homelessness legislation is still “surprisingly sparse”.

Where limited consideration of gender does exist, this is not placed within the context of the structural gender inequality that shapes women’s access to housing
– Engender, 2020

The systems in place to support people dealing with homelessness still often fail to recognise the differences in experiences between men and women. As a result, women remain invisible. Access issues are intensified for women from marginalised backgrounds, including BME women, refugees, women with disabilities, women from the LGBT community, lone parents, and sex workers.

Domestic abuse is one avenue into homelessness that has been well-documented with a feminist lens and is better understood than most situations that lead to housing problems for women in Scotland and around the world. However, it is still a huge problem and remains a root cause of many women’s experience of homelessness.

Homelessness often compounds with other issues women can face in Scotland, including period poverty (which is something YWCA Scotland – The Young Women’s Movement have been campaigning to end). Menstrual hygiene can be more difficult to maintain without access to facilities or necessary products that ensure women’s dignity while menstruating.

Another hurdle that increases the likelihood of women facing problems with housing is the gender pay gap. In Scotland, women are still paid, on average, 18% less than men. Financial precarity is yet another gendered issue faced by women which could result in difficulties with housing situations.

Housing is unquestionably a feminist issue and when reviewed with a feminist lens, we can see just how the intersections of different gendered problems across society adversely affect women. With the work that Ypeople and others are doing to change the systems and processes for offering support to those who are facing housing issues and homelessness, though, there remains hope for women in Scotland to settle into secure long-term accommodation without adding to their worries.