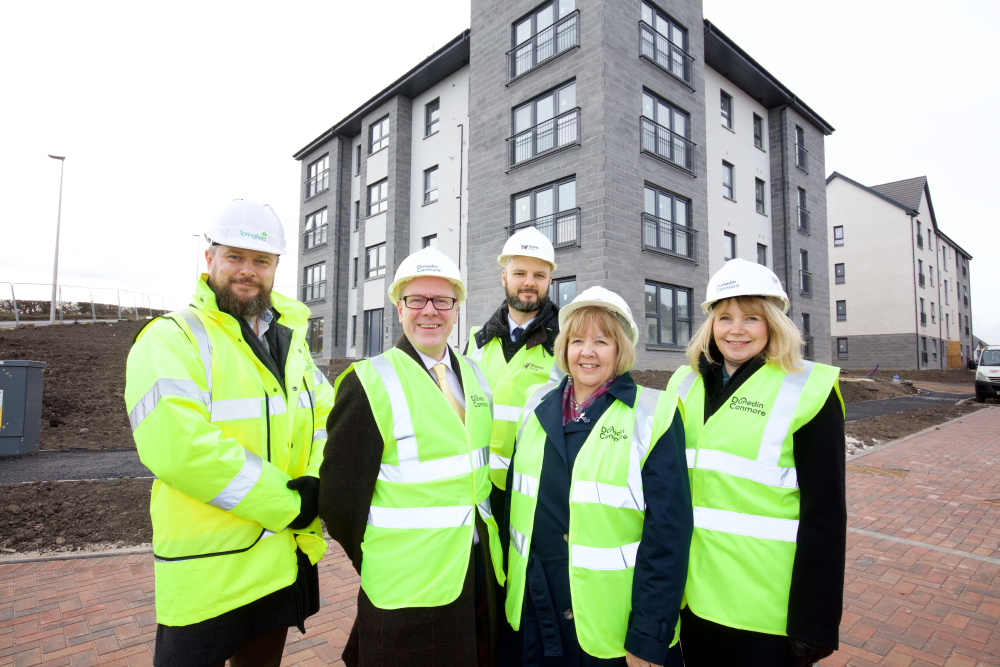 The new funding was announced as Housing Minister Kevin Stewart visited a development in the east of Edinburgh where Dunedin Canmore is close to finishing 20 new affordable flats for rent.

The homes at the Wisp, which will be complete next month, have been built by Springfield Properties and are part of a wider masterplan for the area which will see a mix of affordable housing and homes for private sale by Springfield.

The £16m loan, the largest to be awarded to date through the Scottish Government’s innovative charitable bonds investment programme, will enable Dunedin Canmore to build more homes in the next few years. That includes a further 34 at the Wisp which is part of the Greendykes regeneration area.

Wheatley Group chief executive Martin Armstrong said: “We are delighted to have received £16 million of investment through the charitable bond scheme. This helps us progress our plans for hundreds of new affordable homes in and around Edinburgh as part of our wider new-build programme in support of the Scottish Government’s More Homes Scotland agenda.”

The latest tranche of investment brings the total investment raised by Wheatley Group to over £940m and follows an announcement last year of £185m of funding from the European Investment Bank as well as a £76.5m Scottish Widows and Bank of Scotland debt funding deal.

During his visit to the Wisp, the Housing Minister announced a further £40 million of charitable bonds funding for housing associations in Scotland to invest in affordable homes.

He said: “The government’s innovative use of charitable bonds is making a real contribution to the delivery of our target to deliver 50,000 affordable homes by March 2020. The interest on these loans enables us to create a grant fund to support the development of social rented homes in communities across Scotland.

“To date, the government has invested £115 million in the charitable bonds programme which will provide development finance for over 1,000 affordable homes.”

Daniel Carrico, head of origination at Allia Impact Finance, which manages the bond programme, said: “We’re delighted to secure another £40 million into our charitable bond programme, building on the success since it started over four years ago. We look forward to working with more housing associations and supporting them with this unique source of unsecured finance.”