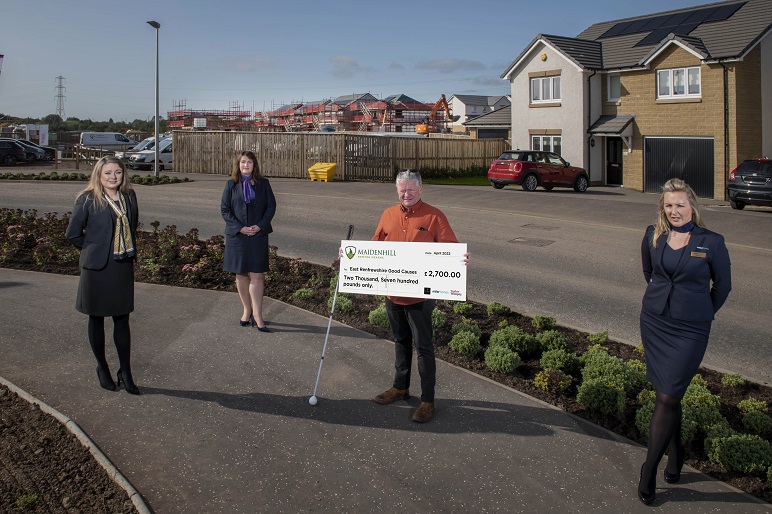 A local charity has received a fourth funding boost from its charity partners at Maidenhill.

This latest funding boost for ERGC, which totals £2,700, is a result of 54 legal completions for both homebuilders since the last handover to the charity, taking the total donated during the partnership to £14,450.

The charity was founded in 2007 by Russell Macmillian, a Newton Mearns native. Thanks in part to the funding from the Maidenhill consortium, Russell has been able to give more than £1 million in donations to groups and individuals within the region.

Over the last few months alone, Russell has been able to help more than 4,400 individuals, including the provision of equipment for those with disabilities and laptops for school children, as well as helping to fund equine assisted learning.

ERGC focuses on helping worthy causes throughout the community, including helping local residents and organisations like care homes and schools, who really need the support. Just this year, the charity announced that its network will extend to new local authorities including Renfrewshire, Glasgow, East Ayrshire, and South Lanarkshire.

Russell said: “We want to say a huge thank to the Maidenhill consortium for this amazing £2,700 funding boost to East Renfrewshire Good Causes.

“Thanks to this, and the other roof donations, we have been able to give vital help to individuals and groups who need it most, which is still on the increase as a result of the pandemic – plus the pressure being put on families due to the increasing cost of living. The welcome funding boost comes as we embark on the charity’s next chapter, taking our work beyond East Renfrewshire, and branching out to Renfrewshire and South Lanarkshire, amongst other areas.”

Kimberly Curley from Taylor Wimpey West Scotland said: “We are so happy to be able to give these donations to such a worthy cause. The work Russell does for the community is simply fantastic!”

Carol Higgins, sales consultant from Cala Homes (West), said: “We’re over the moon to be handing over our fourth ‘roof donation’ to Russell and the team at ERGC. The work Russell does is invaluable to the community, and I am sure it makes a huge difference to many people’s lives.”