Developers behind proposals for a £50 million mixed-used transformation of Leith Walk have been dealt a major blow after the University of Edinburgh ended its involvement in the student flats element of the project.

The University said the decision was prompted by fears among senior staff that Drum had failed to address concerns of the community and the City of Edinburgh Council that the development would have a negative impact on Leith.

The University finally decided to pull the plug when Drum lodged an appeal earlier this month against the council’s rejection of its plans.

At a hearing in January, the council refused unanimously Drum’s application to demolish a sandstone block of shops and offices in a conservation area to build student accommodation and a hotel. The council listed eight separate reasons why the proposals for Stead’s Place, at the foot of Leith Walk, breached planning regulations, including that the “sandstone building makes a positive contribution to the character and appearance of the conservation area and the design of the proposed replacement building does not outweigh the loss of the existing building”.

It is understood that the University wanted Drum to come up with alternative proposals for the site and to listen to the community. Drum’s failure to do this, and its decision to appeal, prompted the University to sever ties with the discredited scheme.

A University spokesperson said: “The University has kept a close interest in the proposed plan for Stead’s Place and, after giving it careful consideration, has decided not to pursue that interest any further.”

A spokesman for the Save Leith Walk campaign said: “We are surprised that the University of Edinburgh has terminated its partnership arrangement with Drum Property Group to build student accommodation in Stead’s Place, Leith Walk. We appreciate that the University of Edinburgh have finally acknowledged the concerns of our community. Unfortunately, this has come too late for many of the local businesses in Stead’s Place that have been forced to close.

“Save Leith Walk has been working to build community involvement in development decisions and we would appeal to property developers, student accommodation providers and other developers to put community consultation at the heart of their design process and not simply as a response to planning requirements.”

A local councillor praised the University’s decision and is now calling on Drum to call-off its appeal.

Green Cllr Susan Rae said: “I really welcome this news. It’s a testament to the skill, dedication and determination of the Save Leith Walk campaign and demonstrates that the university has listened to the community and learned.

“It is time that Drum Property Group did likewise. First their proposals were rejected by the community, then by the full planning committee – now their preferred accommodation provider has pulled out. Those voices need to be listened to and respected. Save Leith Walk has earned that.

“Drum should abandon its planning appeal to the Scottish Government, which will drag the process out for months. Instead, we need a fresh start at Stead’s Place, one which works with the ambitions of the people for mixed affordable housing, adaptable facilities, local business and green space – a community. Open the shops and sit down and talk – with grace and a bit of vision.”

The developer said it will press on with its appeal.

Graeme Bone, group managing director of Drum Property Group, said: “Since purchasing the Stead’s Place site in 2017, we have been delighted with the high levels of interest in the innovative student and hotel elements of our proposals from a range of potential operators, including the University of Edinburgh.

“We are close to selecting our preferred operating partner for what will be a game-changing and vibrant mixed-use development and will make a further announcement when those discussions have concluded.” 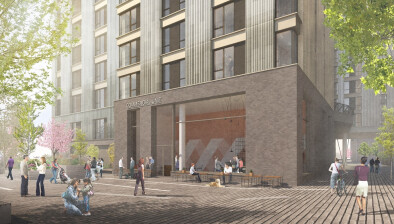