Property developer HBD is to work with Aberdeen City Council on delivering high quality, energy efficient homes in the Bridge of Don. 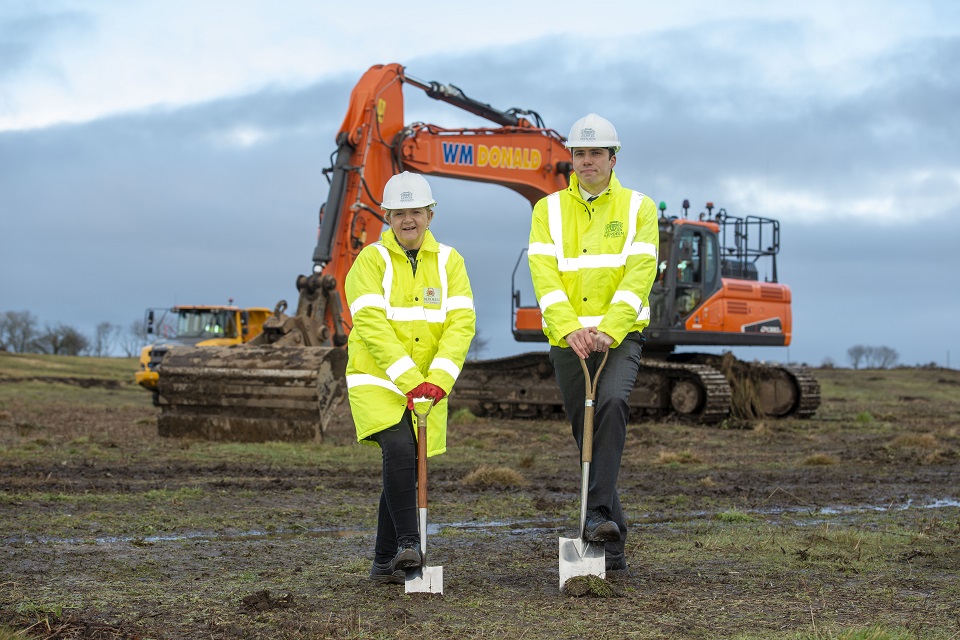 Cllrs Laing and Houghton at the Cloverhill site

Construction of 536 council houses will begin this week on a 56-acre site at Cloverhill in the north of Aberdeen.

The site was acquired by Aberdeen City Council in January, having secured detailed planning consent for housing last year, as part of the local authority’s ambitious housing programme.

HBD has been appointed as development manager for Cloverhill which is nestled on the coast between Bridge of Don and Aberdeen Beach.

The new development will feature “gold standard” homes, with a mix of flats, semi-detached and terraced family housing. The development will also include community facilities, retail units and significant green space with play parks and a sports pitch.

With sustainability at its heart, Cloverhill will not only offer the most energy efficient homes but also boast electric vehicle charging points for 25% of the site from day one with in-built infrastructure that will eventually allow for 100% provision across the site.

Matt Bellshaw, director and head of region for Scotland at HBD, said: “We’re proud to be working alongside Aberdeen City Council on the delivery of this development that will provide these much-needed homes in a sought-after area of Aberdeen. Cloverhill will help set a new benchmark for high-quality, energy efficient local authority housing.

“Close to areas of employment with easy access to public transport, Cloverhill will also feature usable open space, landscaping and parkland for the whole community to enjoy, fostering community spirit and promoting sustainability and well-being.”

Construction on the first phase will begin in February with the first homes scheduled to be handed over to Aberdeen City Council in summer 2023.

The site, formerly zoned for employment land, was originally being brought forward for residential development by Cognito Oak, a joint venture involving HBD and local developers, Wraith. Planning permission in principle was granted in April 2020. But Aberdeen City Council acquired the site as part of a procurement exercise to seek suitable developments to meet its housing targets.