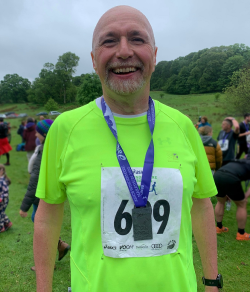 On Sunday 22 May, Andrew joined over 800 runners to take on the ASICS Windermere Marathon, a 26.2-mile course run entirely within a UNESCO World Heritage Site.

Andrew completed the marathon in a time of 4 hours 32 minutes raising funds for Andy’s Man Club, the mental health charity with clubs across the UK offering free-to-attend talking groups for men and challenging the stigmas around male mental health.

Kingdom Housing Association’s staff voted for Andy’s Man Club to be their chosen charity for 2022 and 2023 and have various fundraising events planned over the course of the partnership.

After completing the ASICS Windermere marathon, Andrew Latto said: “Wow! That was tough going but I’m delighted I’ve managed it - knowing my efforts were raising so much money, made the pain on the day and the months of training seem much more worthwhile.

“Running is one of the ways I maintain my own mental wellbeing so it seemed really fitting to use it to raise funds for Andy’s Man Club. Thank you to my colleagues, friends and family for generously donating their money, especially when times are hard for so many, and thanks to Kingdom Housing Association for adding £200 to the total.”

Andy’s Man Club was set up in 2016 by Halifax man Luke Ambler whose brother-in-law took his own life after struggling with mental health problems. With its slogan “it’s okay to talk”, the club now has over 69 groups nationwide meeting every Monday evening at 7pm.

Alex McClintock, project development champion with Andy’s Man Club, added: “Well done to Andrew for completing his run and for helping ANDYSMANCLUB by raising some funds to help us grow across the UK and just as importantly the awareness that this will help raise as well.

“A huge shout out to Andrew and everyone at Kingdom Housing Association for supporting ANDYSMANCLUB and helping us reach #THATONEMAN.”