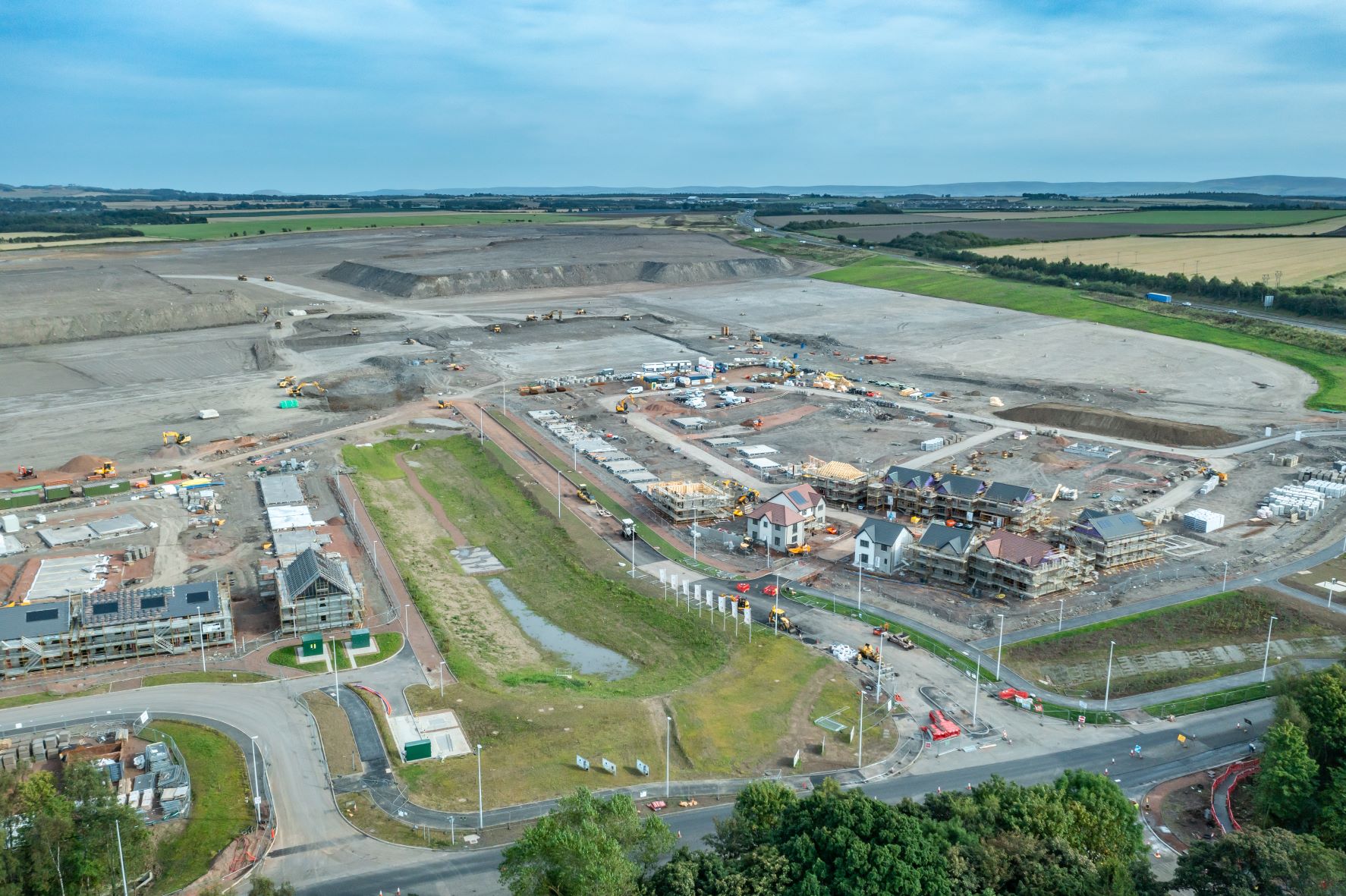 An aerial view of the Blindwells site

Three planning applications relating to new homes and infrastructure at Blindwells were yesterday given the green light by East Lothian Council’s planning committee.

An application detailing the road and footpath network, cycle path, landscaping and drainage infrastructure for Phase Two of the greater Blindwells site was unanimously approved. Phase One of the site, close to Tranent and Prestonpans, is well underway and a number of new homes are already occupied.

A further application detailing changes to the Indicative Masterplan for the greater Blindwells site was also unanimously approved, including an assurance that open space and at least 10 hectares of land for employment use had been identified on land within the site landowner’s control.

The third application was for detailed planning permission for 73 houses and four flats at the North West of the Blindwells site, part of the Phase One development, bordered by the East Coast Mainline. The application for the homes, 23 of which will be affordable, was unanimously approved.

Committee members also unanimously approved an application for detailed planning permission for 90 flats for Dunedin Canmore Housing Association as part of the development site to the South, East and West of Wallyford. The flats will be located close to the new primary school on the site, and will consist of 61 for social and mid-market rent and 29 Livingwell flats for older people.

Retrospective planning permission was granted for the Main Course Restaurant, Main Street, Gullane for the change of use of a residential garden area to outdoor seating for the restaurant and for a covered walkway for staff to use between the kitchen and a storage unit. Planning officers had recommended approval of both applications, which were called off the Scheme of Delegation List by Councillor Findlay. Objections had been received due to concerns about noise and the impact on neighbouring properties. Members voted nine votes to two to approve the application for change of use of the garden area, with conditions including that permission was granted for a temporary period of one year, hours restricted to 11am to 8pm and that no music would be permitted. Members also approved the covered walkway, ten votes to one, with an additional condition proposed by Councillor Findlay that no outdoor cooking will be permitted under the covered area, unless approved in advance by the planning authority.

Permission was unanimously granted for a change of use of agricultural units to storage and distribution, at Skateraw Farm, Innerwick. Objections had been received relating to impact on neighbouring properties and road safety. The application was called off the Scheme of Delegation by Councillor Collins.

An application for substitution of house types and slight repositioning of the layout at Letham Holdings was called off the Scheme of Delegation List by Councillor McMillan. The site is part of the wider Letham Mains development in Haddington. This specific application related to the substitution of 45 Taylor Wimpey house types at the South West end of part of the site, which already has planning consent. Following a debate, the application was approved unanimously with the additional condition that signage be erected to make clear that Letham Mains Holdings Lane was for local access only.