Residents in an Edinburgh community celebrated the opening of 24 new homes which signalled the final chapter in a £70 million regeneration project. 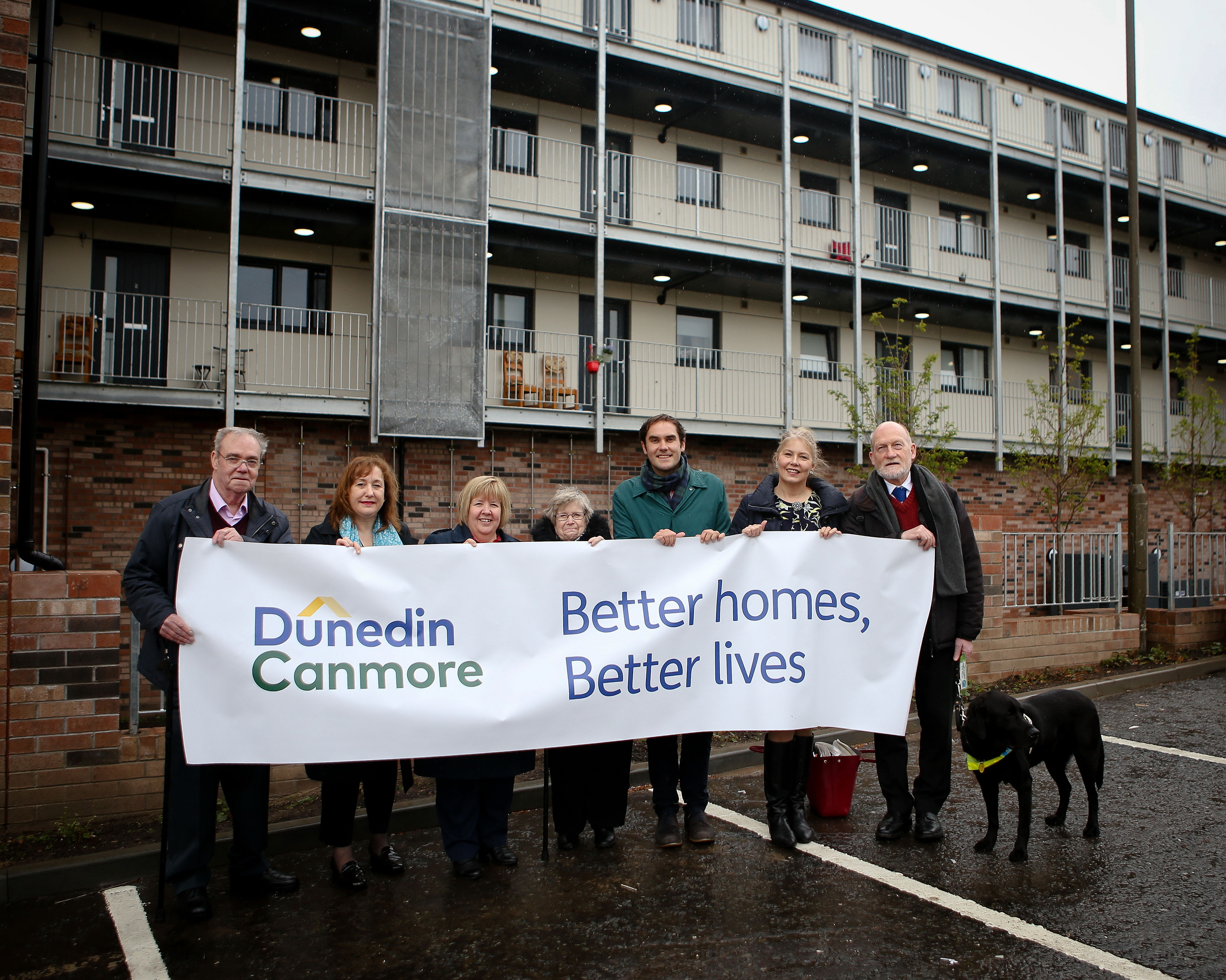 The new affordable homes, built by Dunedin Canmore, mark the completion of a transformation in Moredun and Hyvots in the south of the city which began back in 2000.

Edinburgh’s council leader Adam McVey met with Dunedin Canmore tenants at an event to officially open the new homes and heard how the area has been transformed.

He said: “It’s absolutely fantastic that this major regeneration project which began in 2000 is now complete. It has transformed the lives of hundreds of residents providing them with modern, efficient and affordable homes. This last piece of the jigsaw, 24 homes for social rent, is yet another contribution to our ambitious target to build 20,000 affordable homes by 2027.

“I’m particularly pleased to see that a quarter of the social rent homes are for older people which will help to create a mixed community and help more residents find the house they need later in life.

“I would note the contribution of the Scottish Government’s Affordable Housing Supply Programme (AHSP), which over the years has supported Dunedin Canmore with funding of more than £25 million, to help complete the various phases at Moredun and Hyvots.”

Tenant Derek Colvin has lived in Moredun his whole life and was part of a residents’ group that worked closely with Dunedin Canmore on the masterplan for the redevelopment of the area.

Derek, 66, who still lives in Moredun, said: “The change to the area has been dramatic. The area is so much safer now. The open plan design of the community makes it feel safe and it’s a good place to live.

“Now the final phase has been completed I feel great. Dunedin Canmore has made a big difference and the area has been transformed.” 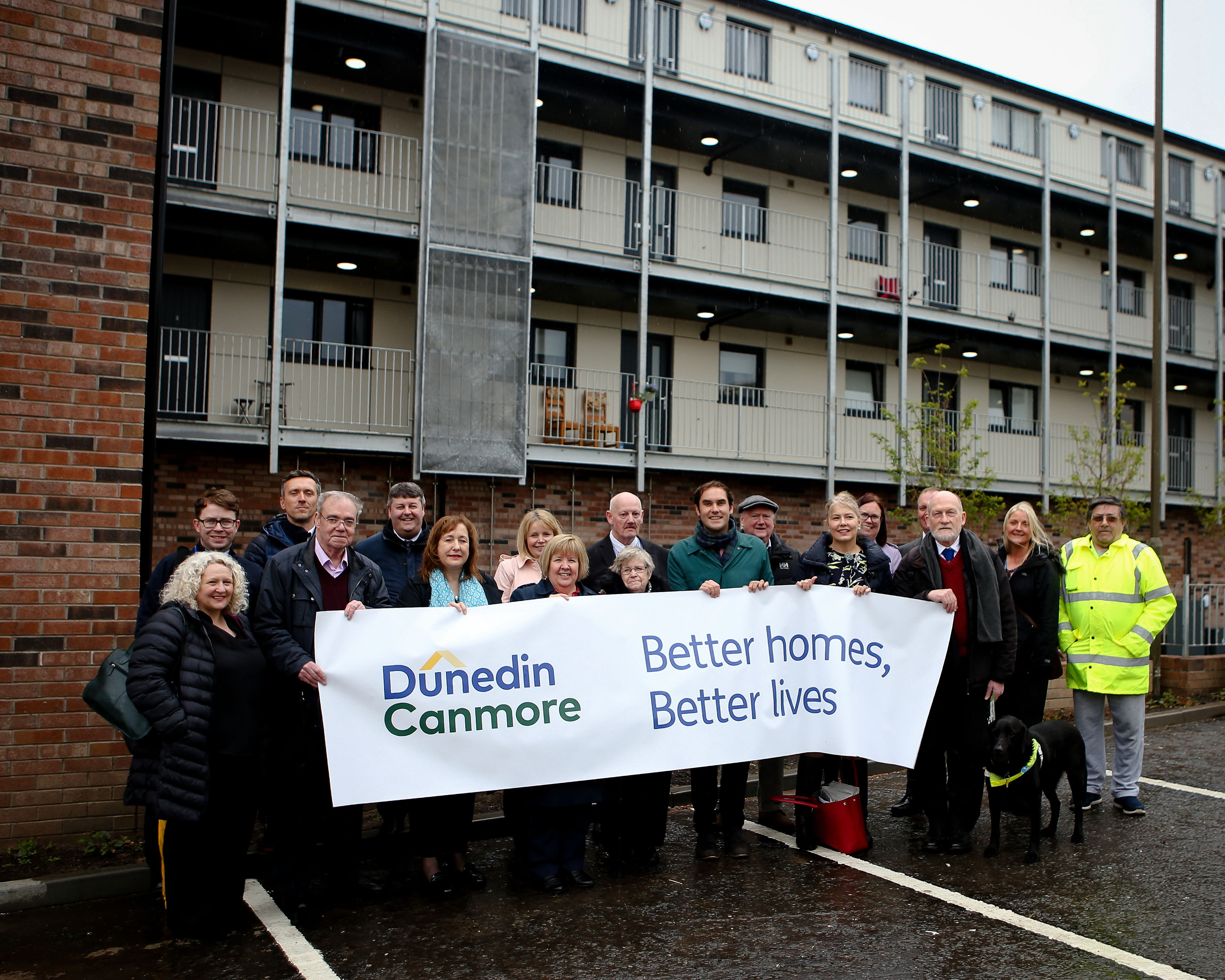 The regeneration plan started back in 2000 when subsidence led to hundreds of homes being lost. The City of Edinburgh Council began developing a strategy for the area bringing residents on board to help shape the plans.

A ballot in 2003 saw Dunedin Canmore appointed lead developer for the project after local residents voted for the housing association to take the reins. The project was granted funding in 2003 by the then Scottish Executive and the housing stock was handed over from the council to Dunedin Canmore in 2005.

As well as refurbishing over 370 existing homes, a total of 446 new homes have been built and new green spaces created. The mix of homes includes large four-bed family homes, one and two-bedroom flats and The Quarries, an amenity housing complex for older people with its own courtyard garden and outdoor gym.

The 446 new homes were built with the help of £40m of grant from the council. The latest block of 24 flats in Hyvots, all for social rent, were part funded by a £1.3m grant.

She said: “It was never just about bricks and mortar, the rebuilding of a community was as much a priority and I’d like to thank every resident who shared their views. Without them the project would not have been such a success.

“I’d also like to thank our partners at the City of Edinburgh Council and the Scottish Government.”

The seven phases were all built by contractors Hart Builders. During the work Hart Builders took on 27 apprentices.

Andy Malice, managing director of Hart Builders, said: “Hart Builders is delighted to have completed the final phase of the regeneration of Hyvots.

“This large programme of works has been delivered through a highly successful 13 year partnership with Dunedin Canmore. Working together and engaging the community, ensured a high quality masterplan for the area was achieved, which has transformed the area.

“Working in one area for such a long period of time has also allowed Harts to provide job and training opportunities for local people and SME’s, and has allowed almost 20 apprentices on Harts well established apprenticeship programme to complete their apprenticeship and join our skilled team of tradesmen, fully qualified.”