Number of homeless deaths recorded in Scotland rises by 20%

An estimated 256 people died while experiencing homelessness in Scotland in 2020, according to new figures published by National Records of Scotland, with more than half of the deaths being drug-related. 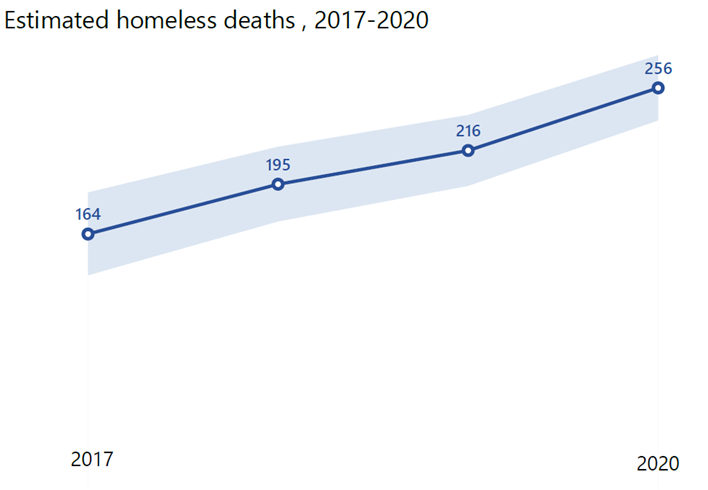 The number of deaths is an increase of 40 when compared to the previous year.

While no deaths were recorded where the underlying cause was Covid-19, more than half of the deaths (151) were drug-related. A total of 8% were due to circulatory diseases, such as heart disease and stroke, with 5% due to cancers.

The report includes a monthly breakdown which shows the number of deaths was consistently higher during the months of May to September 2020 than in previous years.

Comparable figures for England and Wales are not yet available for 2020. Previous figures show that Scotland’s rate of homeless deaths was the highest among GB countries in 2017, 2018 and 2019.

West Dunbartonshire, Inverclyde and South Ayrshire had the highest rates of homeless deaths within Scotland while six local authority areas had no deaths.

National Records of Scotland noted, however, that deaths are sometimes recorded outside of the local authority where a person had applied for homelessness support. For example, if they were placed in temporary accommodation in another local authority area or they were in hospital at the time of their death.

Head of vital events, Julie Ramsay, said: “While these statistics help our understanding of this issue, it’s important to understand these figures are currently experimental and the methodology is under development.

“The estimated number of people dying while experiencing homelessness has risen consistently over the past three years. Improvements to the data sources and the ability to identify whether a person was homeless may partly explain some of this increase since 2017.

“The figures show people experiencing homelessness dying at younger ages than the population as a whole. The most common age bracket for men dying while homeless is 45-54 and for women it is 35-44. Most of those who died (77%) were male.

“More than half of homeless deaths (59%) were drug-related.  Eight per cent were due to circulatory diseases (such as heart disease and stroke) and five per cent due to cancers. There were no deaths where the underlying cause was COVID-19.”

Responding to the figures, Jon Sparkes, chief executive of Crisis, said: “It’s shocking that even more people died while experiencing homelessness last year. Behind every one of these statistics is a real person, with friends and families. They formed a part of our communities and they will be missed.

“Homelessness is an injustice, but it is also a public health emergency. Far too many lives have been cut short and many of these deaths will have been avoidable. That is unacceptable.

“We need to learn from these failings and put in place measures to stop this from happening again. We’ve long known how damaging homelessness can be for someone’s health and it is vital that we act now to prevent people from losing their homes. That means public services, including health bodies, asking about someone’s housing situation, then acting to help if they need it.

“Homelessness is not inevitable. By working together we can end it.”

Scottish Conservative social justice and housing spokesperson Miles Briggs MSP said: “These figures should be a source of shame for the SNP. They have failed year after year to tackle a rise in homeless deaths on our streets and the situation is only getting worse.

“The majority of these deaths are directly linked to drugs, which is why we must guarantee those who need treatment will have access to it. I call on everyone to support Scottish Conservative plans for a Right to Recovery Bill.

“We are also committed to ending rough sleeping by the end of this Parliament. For too long, the SNP have failed to take responsibility and tackle their record on homelessness. These deaths are a scourge on our communities and the warm words just aren’t cutting it any longer.

“We need to see action now and that is why the Scottish Conservatives have called on SNP Ministers to review access to healthcare for people who are homeless or rough sleeping.”

Scottish Labour housing spokesperson Mark Griffin MSP added: “It is deeply troubling to hear of so many deaths of homeless people in Scotland in only a year.

“With such a steep rise in numbers, there must be a full and frank investigation into the damage done by the pandemic.

“It is clear that cuts to councils and to support networks will be putting lives in danger.”

Housing secretary Shona Robison described the figures as “concerning” and said that they show why more must be done to end homelessness and rough sleeping for good.

“Every single one of these deaths is a tragedy. While it is hard to measure homeless deaths precisely, these findings are concerning,” she said.

“This shows why we must go even further in our efforts to end homelessness and rough sleeping for good.

“We are investing more than £50m over this parliamentary term to end homelessness and rough sleeping, including support for rapid rehousing and Housing First.

“This builds on the £37.5m we have already given to local authorities to provide more people with settled accommodation.”

Ms Robison said that new laws will be introduced to prevent homelessness before it occurs.

“Scotland already has some of the strongest homelessness rights in the world, and we are working to strengthen these even further,” she explained

“We will be introducing new laws to prevent homelessness before it occurs, and improving co-operation between health and housing services, with specific measures to help those with more complex needs.”

The figures come as more than £11 million has been awarded to two drugs projects to enable them to expand their residential rehabilitation service as part of a commitment to increase the number of beds in Scotland by 50% to 650 by 2026.

River Garden Auchincruive in South Ayrshire will use the funding over the next five years to increase capacity from seven to 56 residents and build a unit to meet the specific needs of women.

NHS Lothian will receive around £5m to create capacity to support around 600 additional placements over five years at Lothian and Edinburgh Abstinence Programme (LEAP) and increase capacity at the Ritson detoxification clinic from eight beds to 12. This will enable the board to develop a pathway to rehab for those using complex polysubstances and illicit benzodiazepines.

The funding is part of the additional £100m announced as part of the National Mission to improve access to residential rehabilitation.

In a statement to Parliament on progress with Residential Rehabilitation, minister for drugs policy Angela Constance outlined plans to ensure that by 2026, at least 1000 people are publically funded to go to rehab every year - a 300% increase on the number prior to the launch of the National Mission.

Ms Constance said: “While there is much to be done to address our drug deaths crisis we are making changes to support people to access the treatment and recovery that is right for them.

“Our commitment to increase the number of publically funded places by 300% and the number of beds by 50% will provide options for those who can safely access and who want to access residential rehab.

“The funding announced for these latest projects comes from the additional £100m we are investing in residential rehabilitation over the next five and we are determined every penny of that will make a difference.”