Securing support and accommodation for thousands of refugees and campaigning against lock-change evictions by Serco are among the achievements of Positive Action in Housing over the last year. 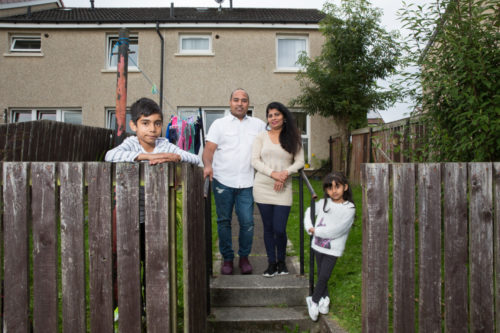 The charity unveiled its 24th Annual Impact Report in Glasgow City Chambers in front of an audience of 110 member organisations from Scottish housing associations, BME organisations, refugee groups and homelessness organisations, trade unions as well as service users and volunteers involved with the charity.

Robina Qureshi, director of Positive Action in Housing, said: “In 2018-19, our staff and volunteers carried out a formidable workload. Among its achievements, the charity enabled 4,671 direct beneficiaries (2,895 men and women, 1,776 children) to overcome crises and build new lives.

“Our Lifeline Service provided proactive casework or emergency support to 1,501 destitute refugees or asylum seeker households. Our Homelessness Advice Service helped new refugees and migrant families to access social housing and homelessness support. The charity also raised over £1.2 million in state entitlements for its service users – money that all went back into the Scottish economy.

“Our Room for Refugees Network arranged 48,022 nights of continuous shelter, thanks to our volunteer hosts, and enabled 230 families and individuals to progress their cases and find new hope. Decades of expertise mean the programme is stable and well run. Our Emergency Relief Fund distributed £61,659, and our Winter Destitution Surgery supported 292 adults and 189 children – up from 24% since last year.

Through campaigning and casework, the charity continued to push back against the ‘hostile environment’ to uphold people’s basic human rights. Some of the high profile campaigns supported by the charity include:

In the summer of 2018, the charity also led a Scotland-wide campaign which successfully forced Serco to cease carrying out lock change evictions against 300 refugees and asylum seekers pending a legal decision by the Court of Session.

The charity received support from private landlords association, the Scottish housing association movement and the outrage of civic society.

“The continued uncertainty of Brexit and the end of Free Movement are a constant backdrop to our work and the lives of EU migrants, increasing feelings of insecurity about their place in Scotland, even having lived and contributed here for years. This especially affects the Roma who are particularly excluded as a community. The EU Settlement Scheme is both an opportunity and a real concern, especially having seen the devastation of Windrush. For some it’s a simple way to get indefinite leave to remain, while others may not get through the process and end up living here ‘illegally’.

Ms Qureshi added: “The Home Office routinely cuts asylum seekers support only to reinstate it. Forbidden to work, people fall in and out of destitution for months or years before winning the right to remain. Rarely has enforced destitution led to people ‘going home’, the suffering caused is immeasurable.

“Hostile environment policies hurt the rest of society too. By delaying resettlement, how many tax millions has this country lost? Will Mears’ new 10-year asylum contract use a more humane approach than Serco’s deeply unpopular mass lock change attempts?

“Looking ahead, we anticipate increased demand. We remain concerned that the ‘hostile environment’ will herald much worse treatment of people of colour and a heritage other than ‘British’. The far right is emboldened by the anti-immigrant rhetoric of some politicians. With the continuing rise in poverty, a lack of decent housing and the fallout of Brexit yet to be known, our role has never been more important. We remain committed to enabling our fellow human beings to rebuild their lives in safety and dignity.

“However, while it has been a strong financial year, there are challenging times ahead. We face difficult decisions in order to ensure the charity can continue to reach those in greatest need. We  need regular donations to sustain our services.”