Scotland records more than 200 homeless deaths in a year

More than 200 people experiencing homelessness died during 2019 in Scotland, where the homeless death rate was higher than England and Wales.

Experimental statistics published today by the National Records of Scotland (NRS) estimated that 216 people experiencing homelessness died in 2019, an increase of 21 deaths when compared to 2018.

Last year was the first year the experimental figures were released. This followed campaigning by a number of media organisations including The Ferret in Scotland working with the Bureau of Investigative Journalism.

Almost three quarters of whom were males, accounting for 157 deaths. The average age at death in 2019 was 43 years for males and 39 years for females.

More than half of homeless deaths were drug-related.

The statistics include people who were in temporary accommodation at the time of their death as well as those who were sleeping rough.

Head of vital events at NRS, Julie Ramsay, said: “Given the importance of having information on the number of homeless deaths in Scotland, we worked with ONS to develop this methodology to provide estimates.

“While these statistics help our understanding of this issue, it’s important to understand these figures are currently experimental and the methodology is under development.

“These estimates do provide context and show that homeless deaths have increased for the second consecutive year, with an 11% increase on the estimate in 2018.”

Shelter Scotland said a lack of safe, secure and affordable social homes is a major factor in the deaths of hundreds of people experiencing homelessness.

The housing charity has called on the Scottish Government to match its commitment to £3.5 billion to deliver more affordable and social homes over the next five years with a new plan to reduce housing inequality when it announces its Housing 2040 strategy next month. 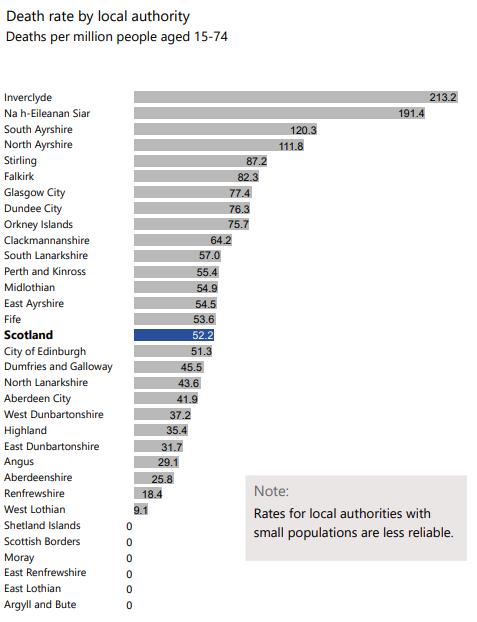 Alison Watson, director of Shelter Scotland, said: “The rising number of people dying at an ever younger age while experiencing homelessness is shocking.

“Housing is a matter of life and death. These deaths fall in the long shadow cast by the shortage of social housing.

“While not often a direct cause of death, being denied the security of a safe and affordable social home adds to the instability many need to rebuild their lives. It creates new health problems and exacerbates those that already exist.

“Scotland has some of the strongest laws protecting people against homelessness in the world and a commitment to innovate with new approaches like Housing First, but that system is constantly undermined by the shortage of permanent social housing. It is a shortage that leads to long stays in temporary accommodation, people trapped in hotels not homes, record numbers of children perpetually homeless.

“Today’s shocking statistics relate to the year before the pandemic. It shows we must never go back to the ways of the past.

“Next month the Scottish Government is expected to set out a new Housing 2040 strategy. Today’s figures show that building enough homes to reduce housing inequality isn’t just the right thing to do, it is the critical to the life and health of the people and communities of Scotland.”

Na h-Eileanan Siar also had a high rate (191.4). But as this was based on a small number of identified deaths, this result should be treated with caution.

Six local authorities (Argyll and Bute, East Lothian, East Renfrewshire, Moray, Scottish Borders and Shetland Islands) had no identified homless deaths in 2019. So these authorities had a zero death rate.

He told Scottish Housing News: “These deaths could have been avoided by providing real resources to build at least 12,000 social homes a year in Scotland, provide wraparound services for drugs, alcohol and mental health and end harmful and substandard temporary accommodation.