TIG named Installer of the Year 2019 by Energy Action Scotland

A local community benefit society which delivers the Home Energy Efficiency Programme: Area Based Scheme (HEEPS:ABS) to the Outer Hebrides is celebrating a national award. 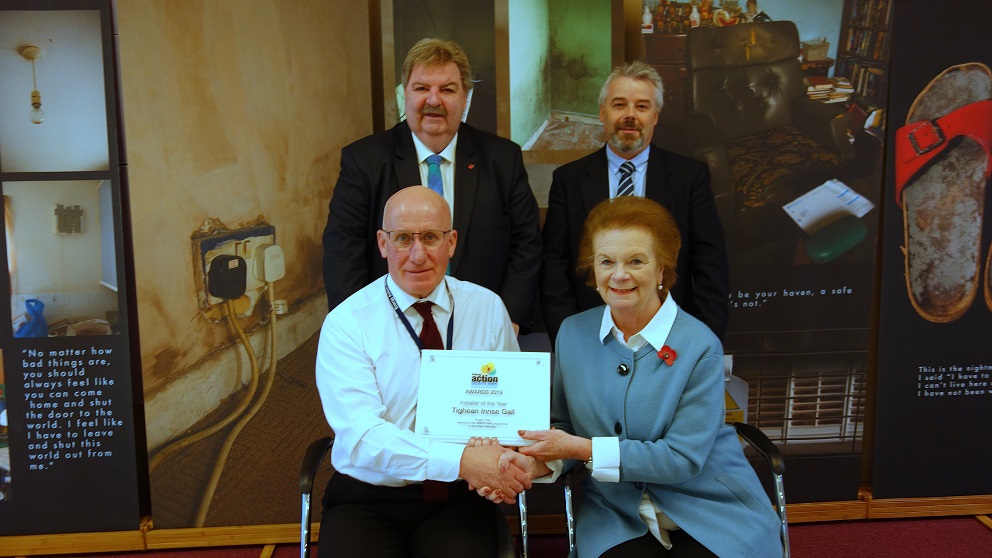 Tighean Innse Gall (TIG) received the ‘Installer of the Year’ award at the Energy Action Scotland Annual Conference and Exhibition 2019.

TIG said the award is a superb achievement and a great honour for the company and its staff in recognition of its high quality delivery of energy efficiency works for fuel poor households.

Energy Action Scotland’s Fuel Poverty Awards 2019 were established to recognise excellence in the fight to eradicate fuel poverty. The award winners were decided by a panel of industry-leading expert advisors across a series of criteria, including innovative approaches to tackling fuel poverty, value and energy efficiency.

TIG chair Brian Chaplin said: “On behalf of the communities we work for I’d like to offer massive congratulations and well done to the team for achieving this award, a credit well deserved.

“It recognises that as we are local, trusted and for the community we are best placed to deliver energy efficiency because we have the skills, determination and capacity to deliver for our islands, from Vatersay to Ness.”

Norman Kerr OBE, director of Energy Action Scotland, said: “I’m delighted that Tighean Innse Gall has won the Installer of the Year award at the Energy Action Scotland Fuel Poverty Awards. They represent everything that is good about the industry, local and trusted and importantly delivering an end to end service.

“I hope they continue to provide these high-quality services for many years to come. A truly dedicated team working for and on behalf of the community they are so imbedded in. Well done.”

Tighean Innse Gall’s expertise and skill has been to blend the Scottish Government’s energy efficiency area based funds ‘HEEPS:ABS’ with ‘ECO’ funds from larger utility companies where they have to meet UK legislative obligations. TIG’s experience and track record in achieving this complicated mix has secured their appointment as agents for Comhairle nan Eilean Siar’s element of the ‘HEEPS: ABS’ scheme for the last six years and has delivered in excess of £15m funding to date.

The ability to use ECO to help those in communities most affected by fuel poverty is by far the highest of any other local authority area in Scotland with over 235 households per 1000 being reached. This places TIG in the top five areas for the UK (with the other four by contrast being densely urban English cities & towns).

Cllr Kenny John MacLeod, chair of Comhairle nan Eilean Siar’s communities & housing committee, said: “I am really pleased to hear that TIG has won the Installer of the Year award. TIG has been our Managing Agent for the HEEPS scheme since it started in 2013 and in that time they have delivered an excellent service to the islands.

“Since 2013, the Comhairle has been awarded £12m of HEEPS:ABS funding from the Scottish Government for energy efficiency works, which TIG has used to lever an additional £3m of funding.

“Together, this has benefited 2500 local households through a range of works, such as their successful Room in Roof scheme, aimed at reducing fuel bills. Addressing Fuel Poverty is a key action for the Comhairle, so I am very grateful to see TIG getting this recognition.”