The £250 million regeneration of Sighthill in Glasgow reached another landmark last week when the Sighthill Circle was restored exactly 40 years after the stones were first erected.

The Sighthill Circle was first completed at the Spring Equinox of 1979, through the then Glasgow Parks Department Astronomy Project, and guided by the Scottish author Duncan Lunan. This was thought to be the first stone circle to be created in the UK in over 3,000 years. 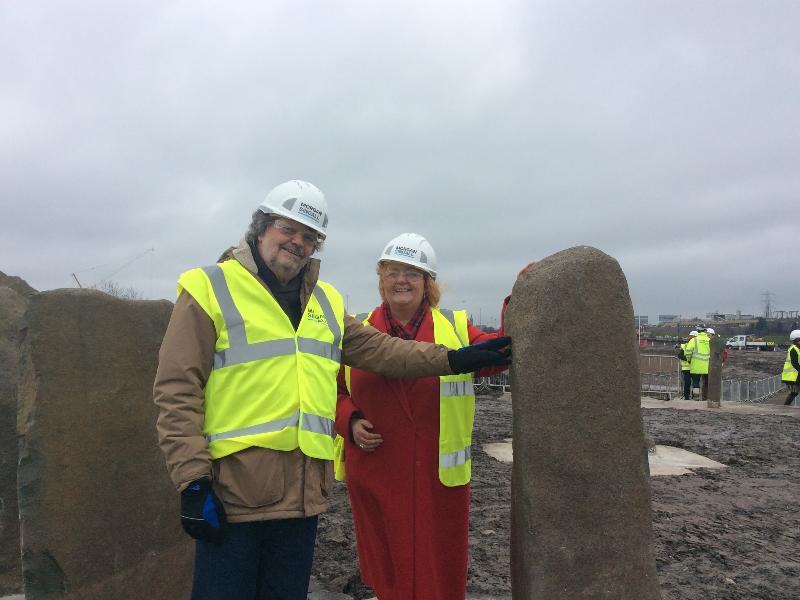 Glasgow City Council and contractors Morgan Sindall have been working very closely with Duncan on the re-erection of the Circle.

The Circle has been relocated within the new landscape, around 200 metres to the south-east of the former site and the original site that Duncan had chosen, however this location was not suitable back in 1979 due to the multi-storey flats then in the area obscuring the horizon sight lines.

The new location means that it is now correctly aligned astronomically - when first erected, this was the first stone circle to be created in the UK in over 3,000 years.

The Sighthill Circle’s location on a mound gives tremendous views of the city centre - underlining how close the area is to central Glasgow - and neighbouring communities as well as the Campsie Hills.

The regeneration of Sighthill is the biggest project of its kind in the UK outside of London, and in the coming years, the area, located immediately to the north-east of the city centre, will be transformed to create a community with:

The Sighthill Circle is another symbol of the area’s regeneration, and can be viewed as a gateway to Sighthill on its south-east boundary. It is expected that visitors should be able to come to the Circle from summer 2020 onwards.

The regeneration of Sighthill had not been scheduled until the late 2020s, but as a result of the bid for the 2018 Youth Olympic Games - which would have supported the redevelopment of the area for the 2018 Athletes’ Village - the commitment to accelerate the regeneration was given by Glasgow City Council, Glasgow Housing Association and the Scottish Government. Although the 2018 bid was ultimately unsuccessful, its legacy is the regeneration of Sighthill happening much more quickly than it would have otherwise done.

The regeneration of Sighthill - the Sighthill Transformational Regeneration Area (TRA) - is being delivered by Transforming Communities: Glasgow, a partnership between Glasgow City Council, Glasgow Housing Association, the Scottish Government; and is part-funded through the Glasgow City Region City Deal, a joint £1 billion investment by the Scottish and UK Governments.

Bailie Jacqueline McLaren, chair of the Sighthill Local Delivery Group, said: “It is fantastic to see the stones of the Sighthill Circle standing once again, and they really are a symbol of a Glasgow neighbourhood undergoing tremendous change. The Circle represents a connection between the area’s past and present, and will be a great attraction for locals and visitors as Sighthill continues its regeneration. Beyond the circle, just some of the things we can look forward to at Sighthill over the next couple of years include a new park, a new community schools campus, and a landmark bridge over the M8.”

Duncan Lunan, science writer and Manager of the original Glasgow Parks Department Astronomy Project, said: “It has been quite moving to learn how much the circle has meant to so many people since we built it in 1979, and I hope they’ll come to it again at its new location, where it will be more visible and accessible. On its specially created platform, this time the stones will stand at their true height, and several additional features have been added that were planned back in ‘79.

“Using the observations compiled over the last 40 years, and computing methods which weren’t available back then, the alignment of the stones will be still more accurate than before.  The contractors and the council have gone to great lengths to do that, so it’s exciting to see it all come together after so long.”