A review of Affordable Housing Investment Benchmarks was carried out by a cross-sector working group of officials between March and June 2021 and was jointly chaired by the Scottish Government and COSLA.

In a joint statement on the report, Aaron Hill, SFHA director of policy and membership, and David Bookbinder, GWSF director, said: “Both SFHA and GWSF were pleased to take part in the 2021 Affordable Housing Investment Benchmarks Working Group. Appropriate levels of grant are critical to delivering good quality affordable housing to a high standard, at affordable rent and in the locations in which it is needed.

“This has been an important piece of work which has led to some important clarifications. However, there are some outstanding areas which require further consideration. We welcome the Scottish Government’s renewed emphasis that the role of benchmarks is to determine whether a project needs to be subject to detailed appraisal, and that they are not grant rates or grant ceilings and have no role in shaping expectations of grant funding levels for any particular project. We also welcome the commitment to review the benchmarks annually.

“Our key concern is that the benchmark levels are unlikely to see the Scottish Government achieve its desired position for the majority of projects to be at, or below, benchmark and avoid detailed appraisal. We believe that this is likely to prove challenging to the pace of the overall programme and could undermine the ambition to deliver 110,000 homes over the next 10 years. The growing evidence of increasing costs as a result of Brexit and Covid-related supply chain problems could further exacerbate this and increase the likelihood of projects exceeding benchmark levels.

“We remain committed to representing the interests of our members on this matter, and to working together wherever possible to deliver high-quality, affordable social housing.”

Local government and Registered Social Landlord (RSL) representatives on the group were also of the view that current benchmark assumptions were driving up rents ahead of inflation, thereby putting further strain on affordability – local government representatives reported that the level of costs falling on council tenants was now at 62%. The Scottish Government was clear however that Affordable Housing Investment Benchmarks should have no bearing on rent setting processes as they were simply a tool for determining the appraisal route for grant applications.

When determining the level of grant funding that they need to apply for in order to deliver affordable housing projects, the Scottish Government noted that grant applicants must be comfortable with the level of borrowing that they plan to take on – as well as being satisfied that tenants’ rents remain affordable (including, in the case of RSLs, ensuring that social rent levels at the point of completion comply with Scottish Government published guidance).

With the removal of (a) ‘outlier’ projects – that is those that were below or over the relevant benchmark by more than £20,000 per unit (to avoid skewing of the data in either direction) and (b) projects in Glasgow (given that the City Council (i) has a separate standard that it requires RSLs to deliver to and (ii) undertakes detailed appraisals of all projects), the Scottish Government reported that between April 2016 to September 2020 70% of social rented units were approved at or below the relevant grant subsidy benchmark assumption which was introduced in early 2016, with 33% of those homes being approved below benchmark.

It was noted however, that an increasing number of projects were being approved above benchmark as time progressed, with sector representatives pointing out that by 2019-20 the majority of RSL projects were above benchmark. Sector representatives also argued that the delivery of projects at or below current benchmark assumptions was largely due to an unsustainable increase in the use of council and RSL resources (thus reducing the grant being sought). 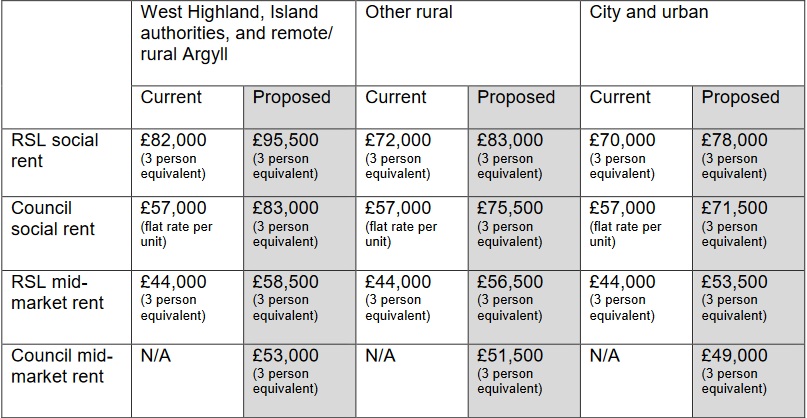 It was COSLA’s agreed position that baseline benchmark assumptions should be the same for councils and RSLs, and that these should be based on the six-fold geographic classification. Having considered the evidence, the Scottish Government is proposing to reduce the differential from the current range of between £13,000 and £25,000 per unit to between £6,500 and £12,500 per unit.

The Scottish Government is of the view that complete removal of the differential is not justified given evidence of the cheaper costs of borrowing for new build for councils, alongside councils having the option to use council tax on second homes. RSL representatives on the group supported the proposal to maintain a differential, alongside the continuing use of the current approach to determining a project’s geographic classification.

All other aspects of the baseline benchmarks system have been aligned so that the regime for councils and RSLs are now identical – this means that council benchmarks will now be at the three-person equivalent level (rather than at a flat rate per unit), council benchmarks will now attract the geographic differential (rather than being the same regardless of geography), and councils will now be able to apply for grant support to deliver homes for mid-market rent (in addition to RSLs).

The group also noted that the additional quality measures that are being phased into the Affordable Housing Supply Programme from 2021-22 – such as the requirement to install automatic fire suppression systems – were likely to increase unit costs further. Following consideration of the information gathered during the review, the Scottish Government is proposing that benchmarks should be introduced for each of these quality improvements such that a project qualifying for all of these additional measures would see the relevant benchmark assumption rising by a further £17,300 per unit, three-person equivalent level.

To respond to concerns that some of these benchmark assumptions may be too low, the Scottish Government will work with councils and RSLs to gather information on the costs associated with certain measures, with a view to closely monitoring these moving forward.

The group agreed that any new set of benchmark assumptions should be reviewed each year. The Scottish Government proposed that the Scottish Social Housing Tender Price Index be used for this purpose, with local government representatives also proposing that other material evidence based issues should be taken into account.

In order to demonstrate improvement in quality and value for money over time, the Scottish Government proposed the introduction of a consistent national programme of continuous improvement. The housing association sector suggested however that further research and sector engagement is needed to design a continuous improvement programme that is realistic, achievable and meaningful in its impact.

The group did not consider all of the elements within its remit in detail. Local government and housing association representatives on the group noted that they would wish to see these discussed as part of a second stage review process, alongside consideration of the following issues which they raised during the review – the requirement for detailed information on built form and type, procurement routes, land and remediation costs, the three-person equivalent, brownfield versus greenfield sites, homes delivered through Section 75 agreements, and space standards.

In favouring a ‘staged approach’ rather than a second stage review process, the Scottish Government confirmed that it would convene discussions with the sector should the following situations arise:

The Scottish Government agreed that some of the other issues which were not covered in detail during the review deserved discussion and analysis, and noted that decisions taken on some could be better informed through an evidence-based continuous improvement system for housing development.