Progress in reducing evictions within Scotland’s social housing sector has levelled off in the last few years, with the number of evictions increasing by 44% between 2013/14 and 2017/18.

In the report, Shelter Scotland argues that eviction is an ineffective, costly and time consuming way for social landlords to deal with rent arrears. While the introduction of pre-action requirements in 2012 did initially result in a reduction of evictions, since 2013/14 the rate has been increasing, the charity added.

Over the last decade the number of social sector evictions in Scotland have come down by a third since the high of 2008/09 (3,297) but, over the last five years they have increased by 44% to the current level.

The report concludes by making a series of recommendations to reduce the use of evictions across Scotland, building on good practice from the sector.

It calls on the Scottish Government to undertake a review of pre-action requirements, and argues that more work needs to be done to monitor the ongoing freezes to benefits and the impact of Universal Credit. 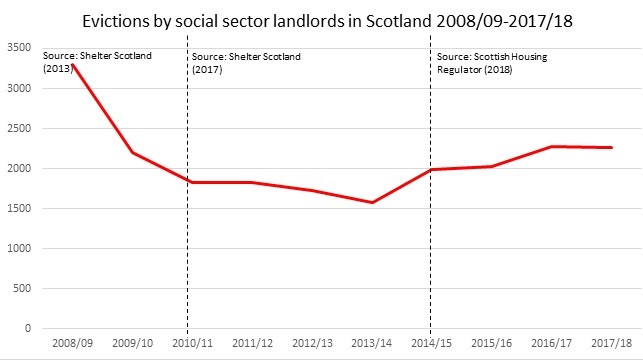 Landlords are also encouraged to adopt a person-centred approach to managing arrears.

Writing a blog on LinkedIn to coincide with the report, Izzy Gaughan, campaigns and policy officer at Shelter Scotland, said stagnating progress in the reduction of evictions is “concerning”.

Ms Gaughan added: “In 2008/09 local authorities made significant advances in reducing evictions despite a tough financial climate, and in 2012 pre-action requirements were introduced which intended to hold all social landlords to a number of steps to engage with tenants before eviction action was taken. However, in contrast to their policy intention and initial progress, since 2013/14 the number of evictions has been increasing.

“We know that the majority of social sector evictions are for rent arrears, in fact 93% of the 2,267 evictions in 2017/18 were as a result of rent not being paid. Whilst we know there are many financial pressures on social housing providers we would argue that evictions are an ineffective response to this.”

“For social landlords, evictions are costly and time consuming. Local authorities also face the potential additional costs of fulfilling their homelessness duty, should the household apply as homeless when threatened with eviction. For this reason, evictions are an ineffective way of dealing with rent arrears, particularly for local authorities.”

Shelter Scotland said it is looking to the landlords who are managing to keep their evictions low to see what lessons can be learned.