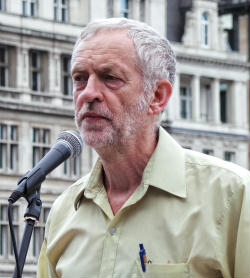 Speaking in the Chingford constituency of the policy’s architect, Iain Duncan Smith, the Labour leader said he would immediately end the worst aspects of Universal Credit and made clear he would scrap the system altogether in the longer term.

Mr Corbyn said an incoming Labour government would end the benefit cap and the two-child limit, immediately suspend the sanctions regime, end Universal Credit’s ‘digital only’ requirement and switch to split payments and fortnightly payments, including an automatic interim payment to end the five-week wait.

As well as scrapping Universal Credit, Labour said it will replace the Department for Work and Pensions with a Department for Social Security, marking a radical shift from a system that “punishes and polices” people to one where social security will support people in finding work and treat them with “dignity and respect”.

Mr Corbyn said: “Universal Credit has been an unmitigated disaster. As well as being behind schedule and over budget it is inhumane and cruel, driving people into poverty and hardship.

“Social security is supposed to give people dignity and respect, not punish and police them, make them wait five weeks for the first payment or fill out a four-page form to prove their child was born as a result of rape.

“The Universal Credit system sums up the priorities of the Conservatives – who think they’re born to rule. A government of the wealthy cutting taxes for the super-rich while forcing people to rely on foodbanks to survive.

“The Tories told us that Universal Credit would make work pay, but we have seen the opposite. More and more people who are falling into poverty have jobs, and more and more children who are growing up in poverty are living in working families.”

“When a Labour government takes office we will introduce an emergency package of reforms to end the worst aspects of Universal Credit.

“And we will introduce a new system that will be based on the principles of dignity and respect and it will alleviate and end poverty, not drive people into it.

“We will lift hundreds of thousands of children out of poverty by scrapping the two-child limit and benefit cap. The pernicious five-week wait which causes so much misery and suffering will go.

“We will suspend the Tories’ pernicious sanctions regime, introduce fortnightly payments, make payments directly to landlords and protect women by making split payments by default, and never again will any woman have to fill in a four-page form to prove her child was born as a result of rape.”

Scottish Labour leader Richard Leonard said: “People were told that Universal Credit would make work pay. Yet the reality has been that some of the country’s most vulnerable people have paid the price of this disastrous policy.

“Our welfare state should be supporting people when they need it. Yet under the Tories, the reality for too many people has been one of punitive sanctions and long waits to access their money.

“I have long believed that Universal Credit is so discredited that it is unreformable and must be scrapped. So I am delighted that Jeremy Corbyn will do just that when Labour comes to power.

“With one in four children in Scotland living in poverty, many as a result of Tory austerity, it is time for the real and radical change that a Labour Government will deliver.”