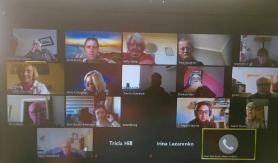 Well aware of the pressure on social housing waiting lists in the city and across Scotland, ETF members are avid campaigners for investment in new and existing social housing to make sure everyone has a safe, warm, well maintained and suitable home.

Tricia Hill, the council’s development and regeneration manager, spoke about the council’s progress to date as well as future plans, including:

Maddie Lou Barink, community organiser at Shelter Scotland, advised the Build Scotland’s Future campaign which aims to get all the major political parties standing at this year’s Scottish Parliament elections to commit to building 37,100 social homes.

Shelter is providing training to leaders in the community to start building a base for change and is looking to increase connections between groups in Edinburgh.

ETF convenor Betty Stone said: “We would like to thank Tricia and Maddie for attending our members’ meeting. It was great to hear about CEC’s housebuilding programme, which is both very ambitious and exciting. We at ETF have already signed the Shelter petition and we would like to encourage as many people and organisations as possible to do likewise.”