Homeless deaths in Glasgow averaging at one a month, charity warns

One homeless person is dying while sleeping rough in Glasgow every month, a charity has revealed.

The manager of The Lodging House Mission, which hosts the Glasgow Winter Night Shelter, said the popularity of drugs such as valium and opiates could be a contributing factor for the rising number of deaths. 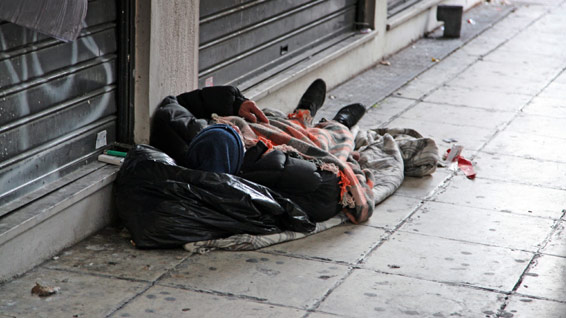 The revelation comes after the body of a woman living in a tent was found in the Gallowgate area of the city last week. Her body was found beside McKinnon’s Bar less than a mile from the shelter.

Gus Smeaton from The Lodging House Mission, said: “We’re averaging at around one death a month right now.

“It’s really sad. We aim to build relationship with these people as well as giving them the assistance they need.

“Our view is that the drugs people are using seem to be becoming more dangerous and users don’t know what is in them. Street valium seems to be a particular problem.”

Mr Smeaton added: “There is a lot of complex issues at play, including mental health problems that can often lead to people becoming homeless.

“It is why homelessness is so difficult to solve. You can’t just throw money at the problem and hope it goes away.”

A report by the Critical Incident and Homeless Deaths group, set up by Glasgow City Council, showed that 47 people with open homelessness assessments died between October 2017 and October 2018.

A spokesman for Glasgow City Council said its Street Team and Housing First project are actively working to end homelessness in the city.