Celebrations continue at Kingdom Housing Association during its 40th Anniversary year with news that the Kingdom Group has been accredited as a Living Wage Employer. 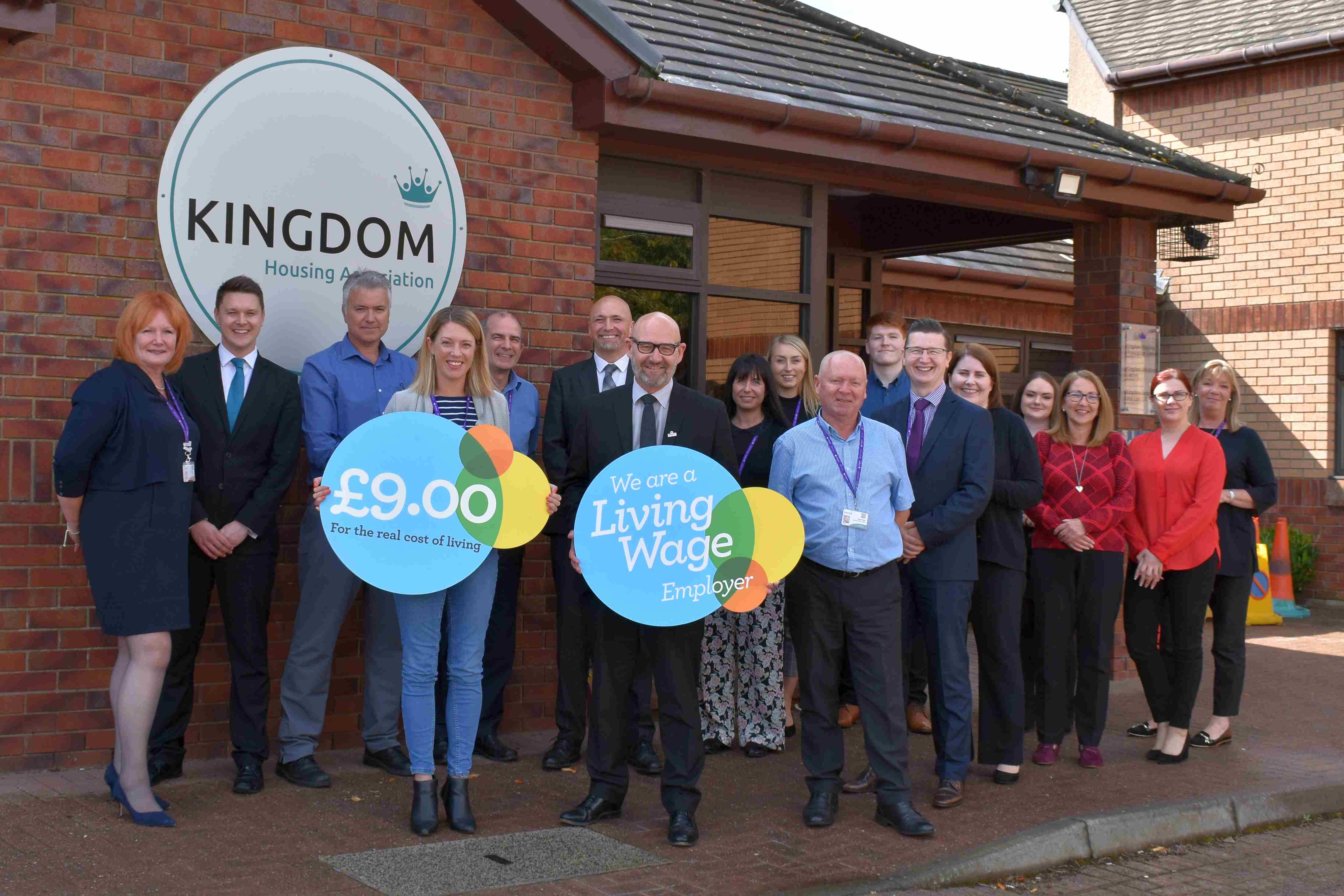 The Living Wage commitment will see everyone working across the Kingdom Group receive a minimum hourly wage of £9.00, significantly higher than the government minimum for over 25s, which currently stands at £8.21 per hour.

Now in its 40th year, Kingdom has always recognised the value to the organisation of its talented and hard-working staff and being accredited as a Living Wage Employer is the icing on the cake of a year of celebrations.

The real Living Wage is the only rate calculated according to the costs of living. It provides a voluntary benchmark for employers that wish to ensure their staff earn a wage they can live on, not just the government minimum. Since 2011 the Living Wage movement has delivered a pay rise to over 160,000 people and put over £800m extra into the pockets of low paid workers.

Bill Banks, Kingdom Group chief executive, said: “One of our strategic objectives is to be an employer of choice and the rates we pay reflect the importance we place on our people. Becoming a Living Wage accredited employer is really important for us as it signals, not only to our staff, but also to the wider community, that Kingdom is now, and will always continue to be, a socially responsible organisation.”

Jenny Gilruth, MSP for Mid Fife and Glenrothes, attended the announcement event at kingdom’s head office in Glenrothes and said: “I am delighted to be here today to celebrate Kingdom Housing Association’s fantastic achievement in becoming a Living Wage Accredited organisation. Being a living wage employer is a significant feat and is an important signal of a responsible employer.

“I really commend Kingdom Housing Association’s commitment to ensuring all members of staff have enough to live on, and I know that this will be looked back on as a valuable investment.”

Katherine Chapman, director at the Living Wage Foundation, added: “We’re delighted that Kingdom Housing Association has joined the movement of over 5,000 responsible employers across the UK who voluntarily commit to go further than the government minimum to make sure all their staff earn enough to live on.

“They join thousands of small businesses, as well as household names such as IKEA, Heathrow Airport, Barclays, Chelsea and Everton Football Clubs and many more. These businesses recognise that paying the real Living Wage is the mark of a responsible employer and they, like Kingdom, believe that a hard day’s work deserves a fair day’s pay.”

Peter Kelly, director of the Poverty Alliance, said: “The real Living Wage is one of the key tools at our disposal to help make an impact on levels of in-work poverty in Scotland. There is a strong business case for paying the Living Wage; but crucially it allows those in work to become more included in society, better provide for their families, and feel that their value and hard work is recognised by their employer.

“Housing associations have a strong history of wider action and the Kingdom Group’s commitment to the real Living Wage is a continuation of this tradition. We are delighted to congratulate the Kingdom Group on their Living Wage accreditation, I hope more organisations follow their lead.”