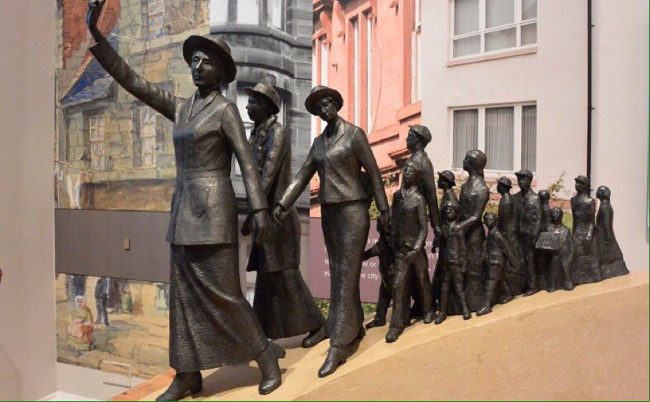 Around 100 hundred years ago, the First World War was raging and there was an increased demand on housing in Glasgow.

Landlords sought to take advantage by imposing massive rent increases. It wasn’t fair. The housing stock was poor, and repairs were non-existent. But if you couldn’t pay you were taken to court and evicted. The people organised.

Women’s movements were formed across Glasgow with the first active resistance in Govan, led by Mary Barbour. They were successful. They secured change – the 1915 Rent Restriction Act. Landlords continued to press for rent increases and Glasgow’s John Wheatley was instrumental in securing the 1920 Rent Restriction Act – before his inspired 1924 Housing Act, which led to half a million council homes being built across the UK by 1933.

History teaches us many lessons. For me, the experience in Glasgow 100 years ago has never been more relevant. Today in Glasgow and indeed in other parts of our country we have a private rented sector that is failing the people. In Glasgow, private sector rents have increased by almost 40% in the last nine years. People are being squeezed. The pips can’t squeak anymore.

The Scottish Government introduced some rent control measures in the 2016 Private Tenancies (Housing) (Scotland) Act. Yet not one local authority in Scotland has ever applied for a rent pressure zone. The legislation isn’t fit for purpose. That’s why I’m supporting Pauline McNeill MSP’s proposed Fair Rents (Scotland) Bill. Pauline’s Bill would cap rent increases to no more than 1% above inflation and give private sector tenants more rights to challenge rents as too high.

Around 15% of all households in Scotland are now in the private rented sector (PRS) – a sector that has trebled in size in the last twenty years. Last year rent increased in Greater Glasgow by 5.3%. The average rent for a two-bedroom flat in Glasgow is now £780. That’s simply astonishing and is more than my mortgage.

How has the Scottish Parliament and Scottish Government managed to sit by and watch all of this happen? Quite a lot of MSPs and MPs are private landlords. How anyone manages to vote on PRS legislation when they are a private landlord, I have no idea. Where did all of these flats come from? Since 1980, half a million council and housing association homes in Scotland were lost through the right to buy scheme. Many of these homes are now in the PRS. One million Scots are in relative poverty and the fastest growth in severe poverty has been in the PRS. It’s not rocket science. Housing benefit or the housing element in universal credit doesn’t cover all of your rent even if you are entitled to “full-rent”. You don’t get it anymore. If you have to shell out money you need to buy food or pay bills on rent you will end up very poor.

Our society has never been more unequal in my lifetime. The Scottish PRS receives half a billion pounds in public money through housing benefit – yet there is virtually no regulation of this sector. The landlord registration scheme is minimal, under-resourced and often useless.

Here’s my early New Year resolution. The Scottish Parliament has to step up and get to grips with inequality and poverty. It’s too timid. The Scottish Government is too timid. Hundreds of thousands of Scots are having to use their food money to pay rip-off rents. The buck only ever stops with the poor. They pick up the tab.

A good place to start is the PRS.

We need a fully resourced Scotland-wide inspectorate with regulatory powers to set a standard of practice and provision based on legislation with the power to prosecute cowboy landlords and letting agencies.

We need a robust statutory mechanism to set rents at a fair and reasonable level.

We need a mechanism that is practical and works for tenants. The Scottish Government need to use all of their powers. They can vary the housing element in Universal Credit to make it cover all of the rent – but only if we have meaningful rent controls. Otherwise you just give more public money to private landlords.

Ultimately, we need more council and housing association homes. But until that happens, we need to protect people in Scotland’s private rented sector with more than words.

This article was originally published in the Glasgow Times