With an estimated 90,000 people living with dementia in Scotland, a new practice framework aimed at improving the way that housing organisations can support people those affected was launched at an event in Edinburgh. 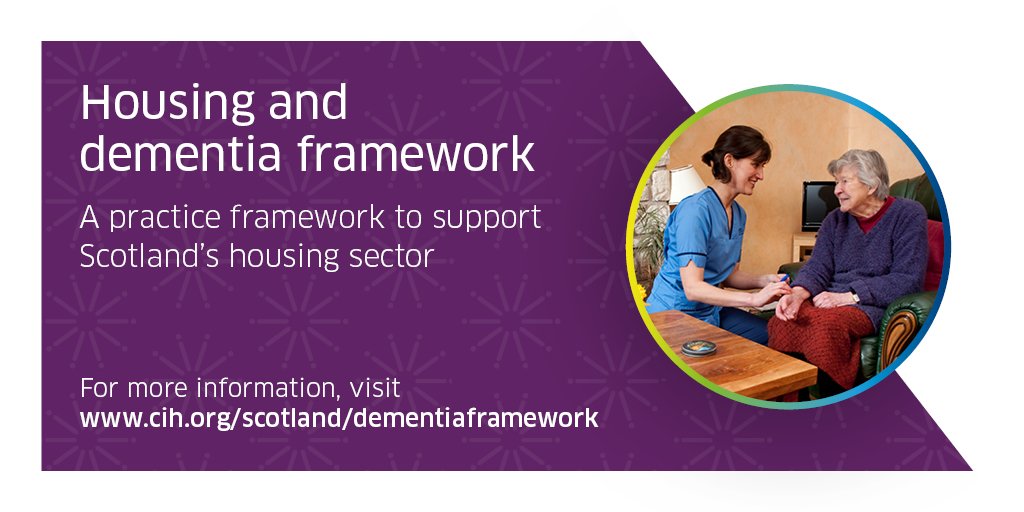 Housing and dementia: a practice framework for Scotland’s housing sector was commissioned by Healthcare Improvement Scotland’s ihub in partnership with CIH Scotland and Alzheimer Scotland.

Delegates at the event on 30 October had a chance to hear from Aberdeen City Council and Viewpoint Housing Association who had both been testing the framework in their own organisations as well as innovative tenant profiling methods being used by Queens Cross Housing Association. A session with the National Dementia Carers Action Network and the Scottish Dementia Working Group gave people living with dementia and their carers an opportunity to share their experiences.

Dr Margaret Brown from the University of the West of Scotland shared her experience of working in academic research and John Blackwood, chief executive of the Scottish Association of landlords spoke about the role of private landlords in supporting older tenants and the need for greater awareness in the sector.

The framework includes five outcomes that people living with dementia and their carers have said are important to them and 11 commitments that housing organisations should already be achieving or working towards in order to meet the outcomes.

Housing organisations across Scotland are being invited to sign up to use the framework to help them identify where they are already working well and areas where more work needs to be done.

Housing minister Kevin Stewart said: “The right home, with the right support and advice, is key to enabling people to live safely and independently for as long as they choose to do so.

“That’s why I welcome this publication which tells us what is important for people living with dementia and their carers. These outcomes and commitments will help us to support those diagnosed with dementia and take forward the actions set out in our National Dementia Strategy and Housing Strategy for Older People.”

Ruth Glassborow, director of improvement at Healthcare Improvement Scotland, said: “As Scotland’s population ages, the number of people with dementia will increase, and we expect the number to double in the next 25 years. Given that most people with a diagnosis of dementia live at home the housing sector’s contribution is crucial, ensuring that people living with dementia can live well at home for as long as possible.

“The housing and dementia framework is an essential tool to both highlight the role that the housing sector is playing in meeting the needs of people with dementia, and unlock the sector’s potential and drive improvement.”

“This framework will help to identify the good practice that is already happening, help to share practice and provide evidence of the contribution that housing makes to health and wellbeing.”

Amy Dalrymple, head of policy at Alzheimer Scotland, added: “The right housing is crucial for people with dementia to be able to live as independently and actively as possible, where they want to be. Getting it right can prevent or delay admission to residential care, or hospital admission due to falls or the health impacts of inactivity.

“Housing, including the housing profession, must be to be part of an integrated, coordinated, personalised response to support people with dementia from diagnosis to end of life. Alzheimer Scotland welcomes the publication of the Housing and Dementia Practice Framework to support housing practitioners to contribute their expertise and action to ensuring that nobody faces dementia alone.”

If you have any questions about dementia, or the support available in your area, call Alzheimer Scotland’s 24 Hour Freephone Dementia Helpline on 0808 808 3000 or visit the website at www.alzscot.org.