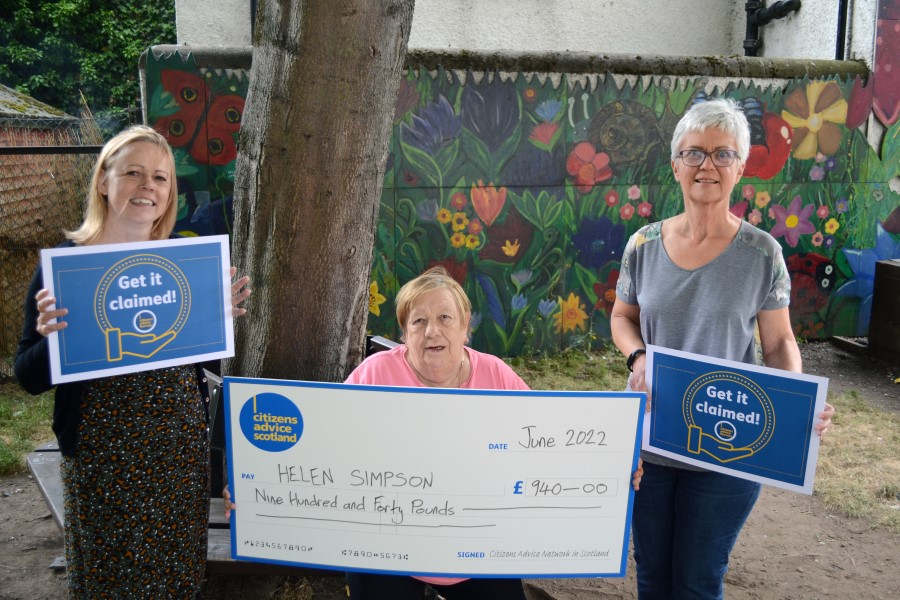 As the cost of living crisis deepens, Citizens Advice Scotland (CAS) is urging people to check what social security benefits and other funds they are entitled to but not currently receiving.

One Musselburgh pensioner, Helen Simpson, has revealed she didn’t know she was entitled to Pension Credit Guarantee worth £83 per week until she visited her local CAB. She is joining the charity today to urge others to check what they are entitled to and ‘Get It Claimed.’

Meanwhile new polling for CAS by YouGov has found that, among those people who did not know how or if they were entitled to claim benefits, there has been a large drop in the numbers who feel too embarrassed to make a claim. The drop is from 1 in 5 (20%) in 2020 to just over 1 in 8 (12%) in 2022.

Last year the Citizens Advice network in Scotland helped 171,000 people and unlocked £147million for them through things like social security payments and employment entitlements. The average gain for those who saw a financial benefit was over £4,400.

CAS Social Justice spokesperson Stephanie Millar said: “The cost of living crisis is hitting people hard. Nobody should be going without heat or food while there’s a pile of cash they could be claiming.

“It’s really positive to see that stigma around claiming social security is falling, but lots of people still aren’t claiming what they are entitled to. That’s where we come in. CAB advisers can check if you are entitled to anything, and then help you claim it.

“In the current circumstances, every penny counts. We can’t promise everyone has a fortune in unclaimed money, but it costs nothing to let us check for you. As with all CAB advice, this process is completely free, confidential and independent.”

She added: “So today I’m asking people across Scotland to check what you’re missing out on. Your local CAB can do this, or if you prefer you can do it yourself using our online tool, www.moneymap.scot. And this call is for everyone – whether you are in work or not, pensioner, student, single or with a family. Our service is for everyone, regardless of circumstance.

“If you don’t claim what you’re entitled to it just sits there in the government vault. What a waste! It’s YOUR money. Why are you just letting it go, even now when you really need it? Contact us today and Get it Claimed!”

Helen Simpson is 67 and lives in Musselburgh. She is a pensioner, who is disabled. Last year Musselburgh CAB helped her claim significant amounts of new income that she had not been claiming because she didn’t know about it. She has agreed to tell her story. (photo attached).

Helen explained: “This time last year my income was my state pension and the disability benefit, (PIP). This was really not enough to live on, and like so many people I was struggling to feed, heat and look after myself.

“Then last summer I had a toothache, and the dentist told me the treatment would cost hundreds of pounds. Well, I just can’t afford that. And I was actually shocked because I thought as a pensioner I would get it for free.

“So I went to the Citizens Advice Bureau in Musselburgh, and explained the situation. They asked me why I wasn’t claiming Pension Credit Guarantee. I said I’d never heard of it and didn’t even know what it was. They told me that it was a weekly benefit and that they thought I was eligible to claim it.”

She continued: “The CAB adviser then helped me with the actual claim. I have to say the man at the HMRC was very nice and super-efficient. He confirmed that I was entitled to this Pension Credit and from now on I would be getting £83 per week, on top of my normal state pension. Not only that, but I could also claim it back-dated for three months, which was a lump sum of more than £900. This was in my bank account that very evening.

“Well you can imagine, I was gob-smacked. That sort of money is life-changing for me. I mean, don’t get me wrong - I won’t be going on a cruise to the Bahamas or buying a Rolls Royce. I’m still living pretty near the breadline. But this extra money has made all the difference. It meant I could get my teeth fixed, and I can keep the heating on instead of rationing it. And there’s food in the cupboard, plus I can also treat my little dog a bit more.

“And this money is not a hand-out or some kind of scam. I’ve worked all my life. Shelf-stacking, cleaning, receptionist – all sorts of jobs. I’ve paid my taxes and National Insurance. So the Pension Credit Guarantee is something I’m entitled to.

“I’m still feeling really elated at how this happened. It was like a dream come true. The only thing that bothers me is that I could have claimed it earlier if I had known about it. I missed out on thousands of pounds! So that’s why I’m so keen now to get the message out to other people not to make the same mistake. You could have money sitting unclaimed right now, so get up and go for it.”

Helen concluded: “Because the CAB tell me they deal with cases like me all the time. And not just pensioners but young people, families with kids, key workers. All sorts of people from all kinds of backgrounds, who are missing out on benefits and grants because they don’t know they’re entitled to them. So the reason I’m speaking out today is to tell people: go to your CAB and ask them to check what you’re entitled to. You could be like me, missing out on £80 a week. Or more. It’s your money, so get it claimed!

“If I hadn’t had a toothache last year, I’d still be sitting shivering in the cold, worried sick about how I was going to pay these big increases in energy bills. Or I’d be in debt – spiralling out of control, which is not a good place to be.

“The CAB has changed my life. They could do the same for you. Go and find out what you’re missing out on. There’s no harm in trying – It’s free to check so you won’t lose anything. So, do what I did. Get It Claimed!”