Scotland registered an estimated 195 deaths of people experiencing homelessness in 2018, the highest rate of homeless deaths in the UK, according to new figures.

Statistics published today by National Records of Scotland (NRS) indicate that the rate of homeless deaths in Scotland was 35.9 per million population compared to 16.8 in England and 14.5 in Wales.

Described by the NRS as “experimental” figures, the 195 deaths in 2018 was an increase of 19% on the estimate of 164 the year before. The NRS said the actual number could be even higher.

The NRS said these statistics include people who were in temporary accommodation at the time of their death as well as those who were sleeping rough.

Paul Lowe, the chief executive of National Records of Scotland and Registrar General for Scotland, said: “NRS has developed a method of estimating the incidence of homeless deaths in response to user demand. It is important to stress that these are experimental statistics and we will continue to work with users and stakeholders to assess their suitability and quality, as we continue to develop our methodology in future years.” 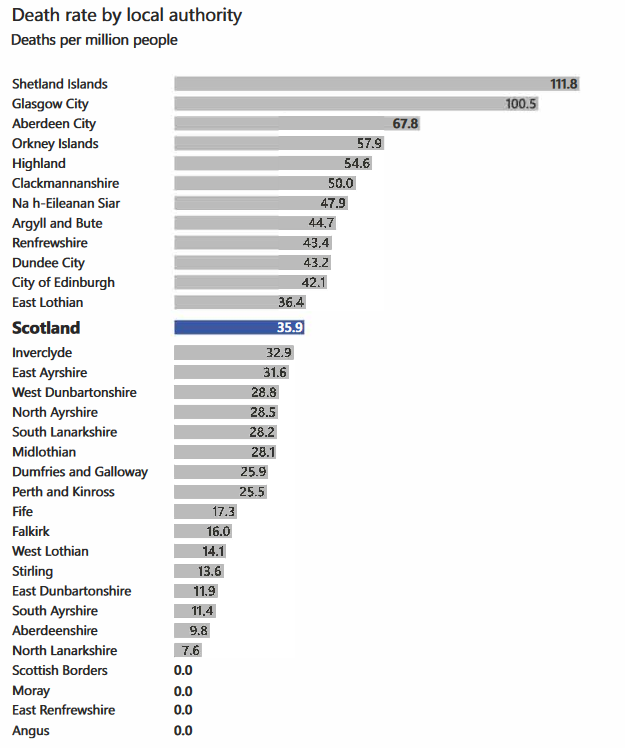 Director Graeme Brown said: “Behind these shocking figures lie individual personal tragedies. People living in desperate situations ultimately failed by the system. They will leave behind them bereaved relatives and friends who have our sympathies.

“It is vital that the effort to end this loss of life does not end with the publication of the figures.

“The housing, health, social care and justice sectors need to work more closely together to ensure people get the tailored support they need for health issues such as mental illness and addictions. We also need to see housing that supports people to recover and stay well.

“The Housing First model is a good example of how this can be done but only if it is adequately resourced with good housing and highly-skilled professionals providing support services to ensure it reaches those most at risk.”

Grant Campbell, director of Crisis Scotland, said: “For the first time, we can see the true, devastating scale of the number of people who have died without a place to call home, because of failings within the very system which should have prevented them from falling into poverty and homelessness in the first place. Behind these figures are human beings - mothers, fathers, brothers, sisters.

“Every death must be fully investigated so that we can learn from the failings which caused someone to die without a home. We’re pleased to see commitments from Scottish Government towards ending homelessness, such as the push towards providing long-term homes and wrap around support for those with complex needs, as well as doing more to help people from losing their homes in the first place.

“Despite this, we still have the highest rates of homeless deaths in Great Britain. This is a damning and urgent reminder that we need to do so much more to support some of our most vulnerable citizens.”

Sean Clerkin, a campaign coordinator for the Scottish Tenants Organisation, added: “The horrific number of homeless deaths in Scotland in 2017 and 2018 further underlines the inhuman way we still treat homeless people in a very unequal society.

“We urge the finance secretary Derek McKay to set aside £130 million in his budget tomorrow to properly tackle homelessness in Scotland. This financial investment would provide first class Rapid Re-Housing Transition, Housing First and very good temporary accommodation for a short period.

“A massive council house building programme has to take place in conjunction with housing associations doing the same with the investment provided by the Scottish Government so that all people in Scotland have dry, warm and secure homes.

“Today marks a very tragic date in our nation’s history which must never be repeated.”

A spokeswoman for Glasgow’s Health & Social Care Partnership said: “Tragically, many of our service users who died had previous or existing addiction issues, some also had significant physical and mental health needs. It is the complexity of those needs, which often contributed to their deaths, rather than specific matters associated with their housing status.

“Sadly, Scotland and Glasgow is experiencing a drugs deaths crisis - which includes record numbers of fatal overdoses and a rise in HIV infections. Some people known to homeless services are among those who have lost their lives - mainly in temporary accommodation or hospitals. This can be emotionally difficult for other residents and staff who work closely with service users often on a daily basis.

“All our homeless services are provided with Naloxone kits which can be used in the event of an overdose to revive someone while the emergency services are en-route. Free Naloxone kits and training are also available to friends and relatives of people known to have drug addiction problems in Glasgow.

“In just four months last year, at the city’s Winter Night Shelter, Naloxone was used 17 times to revive people experiencing an overdose. This starkly demonstrates the extent of the health emergency the city is facing.

“The city’s Housing First programme is helping homeless people with complex needs access mainstream tenancies quickly with wrap-around support to help them to sustain their tenancies. Currently, 98 formerly homeless people have secured Housing First tenancies in the city, since the initiative began in September 2018. The majority of these tenancies have been maintained with additional support reflecting our commitment to those with the greatest needs.”

Read more about the NRS’ approach to developing the experimental statistics here.