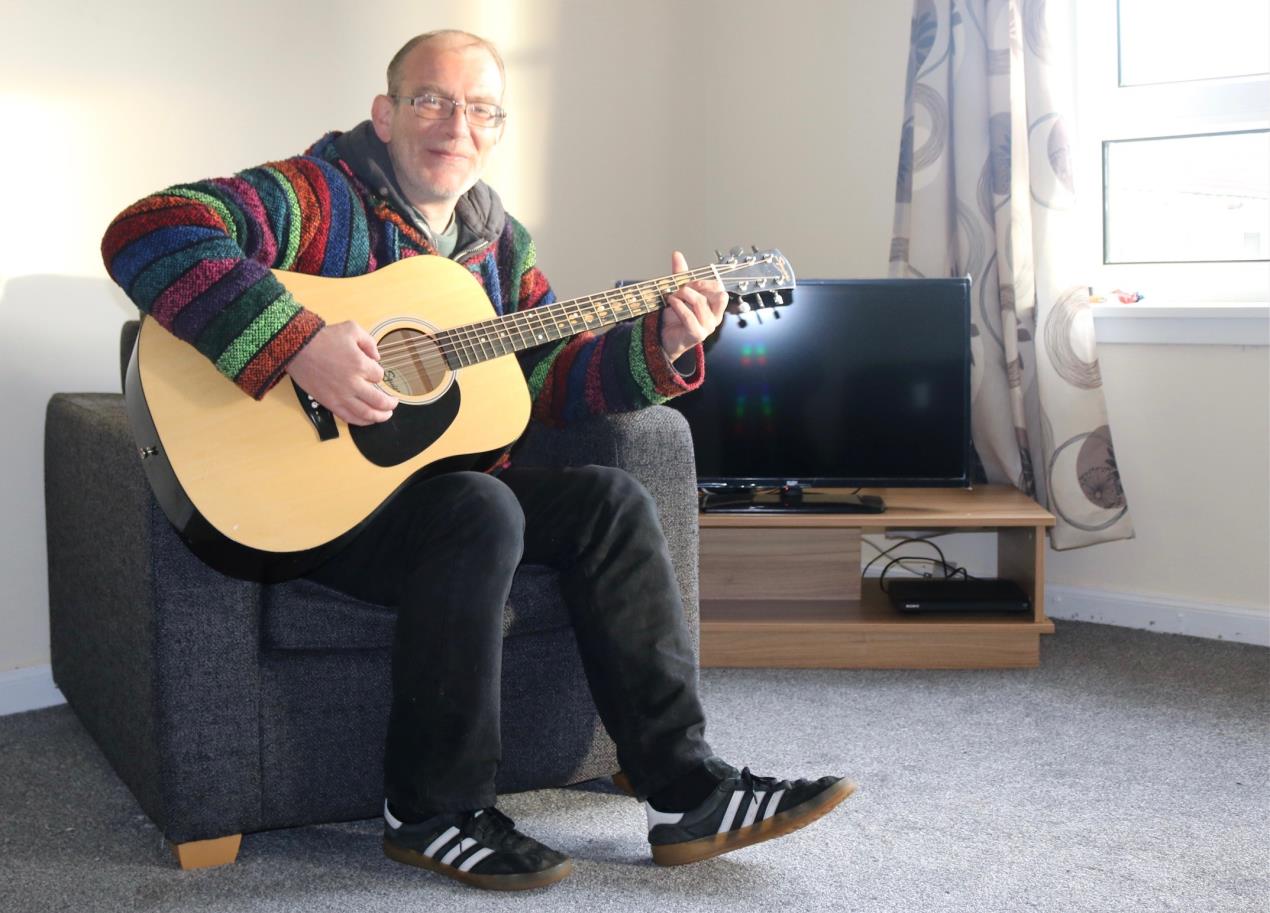 Fraser relaxes in his new Housing First flat with his guitar

Former bar worker, Fraser, is starting a new life in a secure settled tenancy after experiencing homelessness on and off since his teens. Four weeks ago, the 44-year-old got the keys to a flat in North West Glasgow where he is settling in and planning a brighter future.

Thanks to Glasgow’s Housing First programme, which provides people with tenancies and intensive wraparound support, he plans to make this flat a permanent home.

Fraser is one of almost 250 homeless people who have been provided with new secure tenancies from the city’s housing associations and intensive support by Glasgow’s Housing First team which includes Glasgow’s Health & Social Care Partnership which commissions the Salvation Army and works in partnership with the Housing First Consortium to provide ‘in tenancy’ support.

He said: “It’s been brilliant since I moved into this flat, before I was in a temporary place. Now I have a sense of permanency. The flat’s mine, I can redecorate, I can plan for my future, I can get a job and look forward to things. Hopefully, one day, I can get a dog.

He said: “In the past, if something went wrong, I would stick my head in the sand until problems such as rent arrears mounted up. Then I’d become overwhelmed and just up and leave - walking away from the tenancy. In my mind, it was easier to walk away from everything than deal with the problem.

“At one point, I slept in the woods for six months. I knew I could declare myself homeless and get into a hostel or temporary flat, but I didn’t want that, I just wanted the world to go away and leave me alone.”

With the help of his support worker, Fraser now aims to tackle problems proactively to prevent them spiralling out of control.

He added: “Now if I’m panicking about something, I can text my support worker. She is a brilliant woman and an absolutely essential part of my life at the moment. She’s helped me sort out my benefits, register with my GP and apply for a council tax rebate. She’s encouraged me to take part in things like volunteering.”

Fraser has acquired new skills on a build-a-bike course with a local charity. He refurbished a bike, building it up from just a frame and customising the paintwork. At the end of the course, he got to keep the bike and was asked to become a regular volunteer - helping others improve their skills once a week. Along with his guitar, his bike is his most prized possession.

He continued: “It’s hard to adjust to having things again, when you’ve had nothing for so long, but I love going out on my bike and playing my guitar.

“My life has shown me that anyone can end up in a bad situation. Life can throw you a curve ball and you just don’t know what to do. It doesn’t mean that you’re a bad person, because you can’t hold on to a tenancy, it’s just life. I’ve seen lots of people who society might look at in a certain way, but they are just good people who have lost their way, or life has done something tragically awful to them, and they can’t cope. Thanks to Housing First, that’s now being addressed in a logical, residential way.”

Now he’s settled in a new home, Fraser is looking to resume work in the hospitality sector. He is attending a Jobs Fair and aims to get his Scottish Personal Licence to improve his chances of finding work. This is a hospitality sector licence which enables someone to sell or authorise the sale of alcohol.

Housing First is a rapid rehousing approach to tackling homelessness amongst people with complex needs such as mental health or addiction issues. It turns conventional homelessness practice on its head.

Previously people were supported to tackle complex needs in a bid to become “tenancy ready”. New thinking concludes that housing should be provided rapidly and be supplemented by intensive support to address health issues and tenancy longevity.

Councillor Mhairi Hunter, Glasgow’s convener for Health & Social Care, said: “Housing First is helping to truly transform the lives of homeless people in Glasgow. Secure tenancies and intensive support is being provided to assist some of the city’s most vulnerable people to rebuild their lives, sustain their tenancies and improve their physical and mental health.

“The programme is offering people a chance to start afresh by providing a world of opportunities, such as learning new skills, improving their employment prospects and widening their social networks through volunteering to improve their lives long term. From this stable base, people can begin planning a brighter future.”